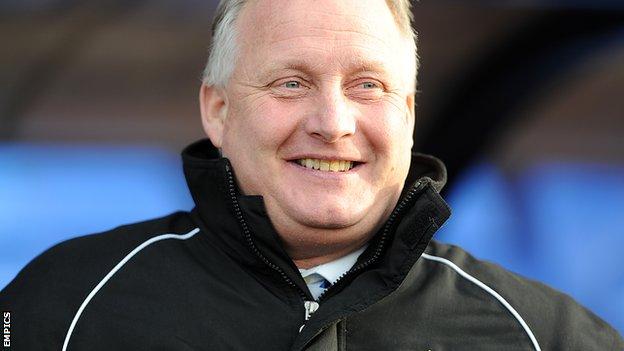 Bury manager Kevin Blackwell was delighted to see his struggling side topple promotion-chasing Swindon and boost their hopes of survival.

The Shakers bounced back from a on Friday with a

Blackwell told BBC Radio Manchester: "I feel like I should be standing here with six points from the last two games, but what a way to return.

"To come to second in the table and do that to them was fantastic."

The victory came with a tinge of frustration for Blackwell, who saw his side surrender a one-goal lead at Meadow Lane four days earlier and succumb to a heavy defeat.

The Bury boss continued: "We knew we had to be well organised because they're good going forward and they've scored a lot of goals this season.

"The players stuck to the game-plan. That's what frustrates me from Friday night. After 60 minutes, we were looking comfortable and then we shoot ourselves in the foot with stupid decisions."

Captain Steven Schumacher netted the only goal against managerless Swindon - his 10th of the season - to lift Bury to within six points of Oldham, who sit immediately above the relegation places.

"We've found a little hole for him that works for us and 'Schuey' there," said Blackwell. "He's a very clever player in and around their box.

"I said to him that we needed to get him closer to their box and if I put him in a midfield two, he's a got a lot more [defensive] responsibility. Since we've put him in the hole, he's picked up four or five goals."