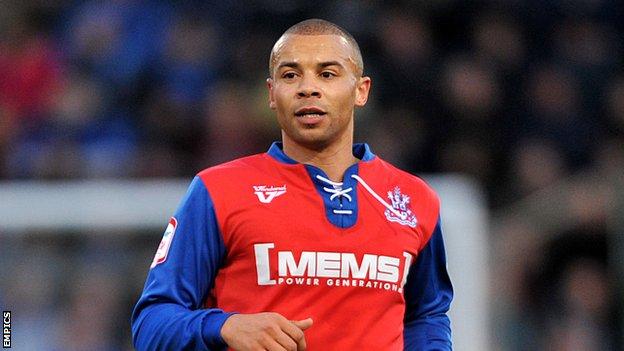 Gillingham striker Deon Burton says the League Two leaders will try to put Tuesday's defeat by Oxford United behind them as quickly as possible.

The 1-0 reverse was the Kent club's sixth home defeat of the season.

He told BBC Radio Kent: "All the players are a bit down because everyone to a man knows they can do better. We don't become bad players overnight.

"We got to where we are by being a unit and sticking together. We'll carry on doing that."

We have said that our target over 46 games is to get as many points as we can. We are looking at the bigger picture

The Gills remain two points clear of Port Vale after the second-placed side lost at home to Exeter and Burton says their reaction to the loss against Oxford will be crucial.

"We are still top of the league," the 36-year-old continued.

"These things happen. It's how you bounce back.

"We didn't like our performance or the result. But I'm guessing the Port Vale players are probably feeling exactly the same as us."

"We have said that out target over 46 games is to get as many points as we can," Schofield told BBC Radio Kent.

"There are going to be games we don't take points out of but we have got a goal we are aiming for.

"We will be judged on that over 46 games. We are looking at the bigger picture."

Gillingham's form at Priestfield this season is in stark contrast to their results away from home.

The Gills have the best away record in the division and recorded a club record 11th away win of the season at Chesterfield on Saturday.

"The fans hear about what we do away from home and then we come back to our ground and they expect to see the same," Burton said.

"We weren't at full tilt against Oxford and the fans let us know. They are entitled to say what they say.

"We will knuckle down and we go again on Saturday."