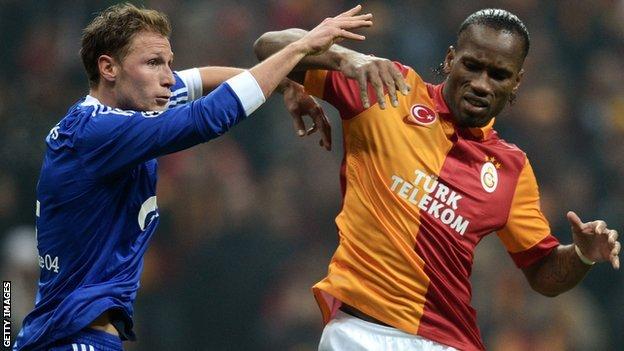 Didier Drogba is eligible to play for Turkish club Galatasaray in the Champions League after Uefa rejected a protest by German side Schalke.

The 34-year-old made his European debut against Schalke on 20 February in the last-16 first-leg tie, which ended 1-1.

The Bundesliga outfit claimed the former Chelsea forward had not been registered in time to qualify for the knockout stages of the competition.

However, Uefa ruled the Ivory Coast star had been registered by 1 February.

If they had been found guilty of fielding an ineligible player, Galatasaray faced going into the return leg in Gelsenkirchen on Tuesday 12 March with a 3-0 deficit - Uefa's standard punishment for the offence.

Having made an appearance as a substitute in a league game, in which he scored just minutes after coming on, Drogba made his full debut for Galatasaray in Istanbul.

Drogba's 18-month loan move to the Turkish side from Shanghai Shenhua, announced at the end of January, remains controversial.

Shenhua, with whom Drogba had signed a two-and-a-half year deal last summer, said they were "deeply shocked" by what had happened and are set to protest to Fifa.