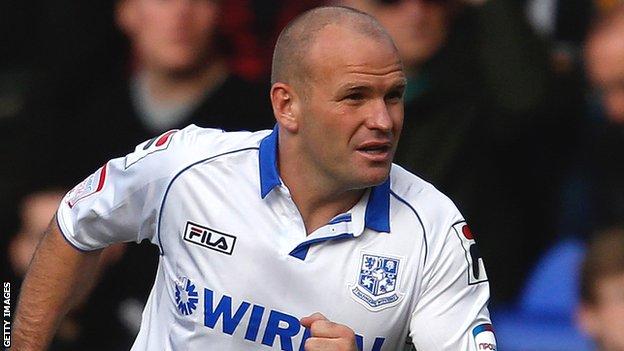 Tranmere's injury problems have worsened with the news that veteran pair Andy Robinson and Ian Goodison will not face Yeovil on Saturday.

And it has been confirmed they will not recover in time for the weekend.

"They'll not be fit for Saturday, that's for sure. They're a little bit older so how long will they take? I don't know.

"We'll have to let things settle down and see how things are on Thursday. There's not a great deal we can do.

On-loan on a hamstring problem, while as he recovers from a collapsed lung.

Captain James Wallace has already been ruled out for the rest of the season with a knee complaint.

In addition, a possible loan move for Middlesbrough defender Ben Gibson - who had a successful spell at Prenton Park earlier this season - has been scuppered for the short-term at least, after he suffered a knee injury in training.

Rovers would have gone top of League One if they had held onto the lead given to them by Abdulai Bell-Baggie.

But County hit back with a late equaliser, leaving Moore to question his side's attacking approach in recent matches.

"In the last three games, their centre-backs have gone home with headaches," said the 60-year-old. "We've hit everything long and straight and they're clearing everything.

"We need to get the best out of Jean-Louis [Akpa Akpro] and that's by playing the ball in behind, not on top of the defence's heads."