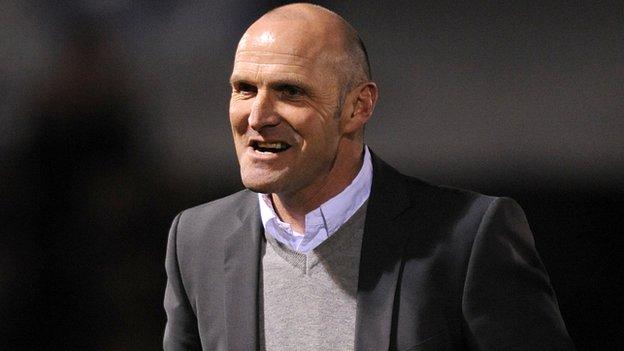 Kidderminster Harriers boss Steve Burr warns that, after battling their way into the heart of the Blue Square Bet Premier promotion picture, his in-form side now face a tough run-in.

Harriers' 45 points out of a possible 51, including five wins out of five in February, has won Burr the Blue Square Bet Premier manager of the month award.

But he points out: "We've got some really tough games coming up.

It's been an unbelievable run and long may it continue

"We've still got to go to Luton, Grimsby, Wrexham and Newport."

And Burr knows that, with meetings also still to come against teams needing points for quite different reasons, relegation battlers Ebbsfleet, Gateshead, Lincoln City and Stockport County, there really are no easy games.

"Every single game from now until the end of the season will be tough," he told BBC Hereford & Worcester, after marshalling his troops to a battling 1-0 win at relegation-threatened Nuneaton on Tuesday night.

"Nuneaton were fighting for their lives. And it will be the same with Ebbsfleet on Saturday."

It was top scorer Anthony Malbon's sixth strike in five games that earned the Harriers the points in midweek and, coming off a 14-match barren run without a goal, it has now also earned him the Blue Square Bet Premier player of the month for February, to complement Burr's award.

"The type of characters they are, they'll be taking these as awards for the team," said Harriers assistant manager Gary Whild.

"The goals are now coming thick and fast for Malbs.

"As a striker you're expected to score and it was hard for him when he wasn't scoring but what kept in was his contribution other than his goals. And he's really got himself up and running now."

After finishing sixth in successive seasons in the Conference top flight under Burr, Harriers had high hopes at the start of this season, only to then go and lose their first five games.

Even when they stopped the rot by drawing their next five games, Burr's men were still bottom in late September.

But they have lost just three times now in 24 games, have risen to second place, are in prime contention for a play-off place and just two points adrift of leaders Wrexham, who have a game in hand.

"It's been an unbelievable run and long may it continue," added Burr. "We just keep going and hopefully we can achieve something."