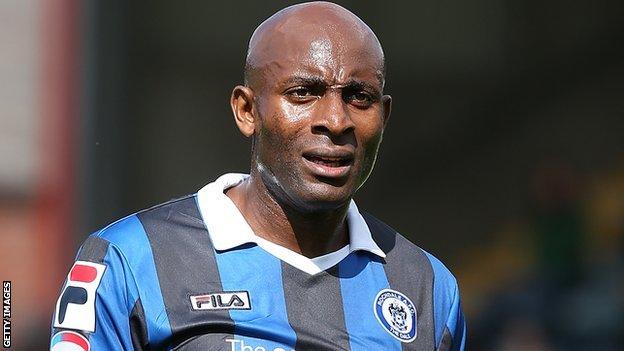 Adebola has joined the Blue Square Bet Premier leaders from Rochdale until the end of the season.

The 37-year-old striker missed Wrexham's 1-0 win at Barrow as he had not gained international clearance in time.

Player-manager Andy Morrell criticised "stupid" Fifa rulings after Adebola was ineligible for the game at Barrow.

The Wrexham player-manager had been angered by a delay earlier in the season which held up the loan move of Bury striker Andy Bishop.

"It's ridiculous and it's not fair," Morrell said before Adebola's international clearance was granted.

"I'm just fed up of it because it happened with Bish [Bishop]. If we had Dele[against Barrow] we might have won handsomely, who knows?

"Newport are in the same position and I think something needs to be done. But nobody's going to hear us shouting from down here in the Conference are they?"