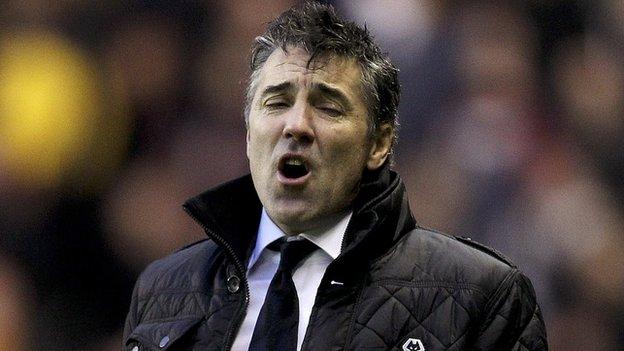 Wolves manager Dean Saunders says he will only sign "100% committed" players after pulling out of a potential loan signing for the relegation-haunted Championship club.

"If they're coming just to get games, that's no good," he told BBC WM.

"We tried to bring one in yesterday but that fell through at the last minute.

"I can't have anybody on the pitch who's not 100% committed to what we're trying to do and prepared to grind a result out," added Saunders.

"When you get to this stage, you've got to ask the question of what the motives are of the players coming to play for us.

"There's got to be some reason why they'd want to come and play for us when we're in a battle.

"If I get a player in on loan, either he's got to be coming to impress me to try and win a contract next year or he's a really good character with pride in himself.

"It's no use just trying to get in someone who simply wants to get games in as they're not playing at their clubs."

After failing with a bid to bring in Birmingham City centre-half Curtis Davies, as well as reportedly being linked with his Blues team-mate Marlon King, Saunders was unable to make a senior signing in the January transfer window.

"But the reason we didn't sign anyone is that the squad is too big and the manager hasn't found anyone good enough to replace the players he already has in the squad."

But Robinson's first two matches have both ended in defeat, And, although Saunders' eight games in charge have all left him reflecting on a succession of 'ifs, buts and maybes', four draws and four defeats, all by the odd goal in three, still adds up to just four points out of a possible 24.

And, with 12 games to go, Wolves remain in the bottom three, two points adrift of fourth-from-bottom Barnsley.