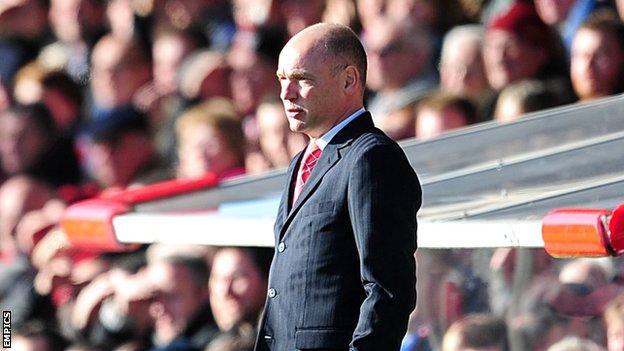 Brentford manager Uwe Rosler says his side must improve to stay in the League One promotion race despite beating Crawley Town 2-1 on Tuesday.

The Bees sit fifth in the table but just four points currently separate the top seven teams in the third tier.

He told BBC London 94.9: "I am very disappointed by the performance.

We were too light-hearted when we were one man up. Our players thought it was enough but it wasn't

"We need to look beyond the result. I said to the players that if we want to do well this season we have to do much better than what we showed today."

The victory over Crawley was only Brentford's second in their last seven league games but was enough to lift them back into the play-off places.

Brentford held a one-man advantage over the West Sussex club following a first-minute red card for Reds defender Mark Connolly, but the German was unimpressed with the reaction of his side.

"We were too light-hearted when we were one man up," Rosler said.

"We stopped doing what had worked well in the first half, when we could have been up 3-0 or 4-0. Our players thought it was enough but it wasn't.

"Crawley gave it everything but I am disappointed with how we used the extra man and our mistakes.

"The best thing is for us to be happy for the three points and move on."