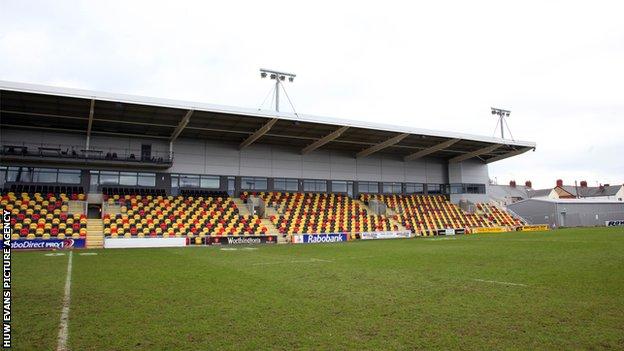 A new lease was necessary to meet Football League requirements should Newport be promoted to League Two or reach the Blue Square Bet play-offs this season.

"This is another milestone in the history of Newport County," said chief executive Dave Boddy.

They struck a three-year deal to move from Spytty Park to the home of rugby sides Newport Gwent Dragons and Newport Rugby Club.

"We now have a secured future and a platform from which we can formulate a long term business plan and structure for many years to come," Boddy added.

"Hopefully, what we have achieved off the field today will help support what Justin and the players are achieving on the pitch"

The new 10-year lease meets the requirements of Newport County and the two rugby teams as well as the football and rugby authorities.

The agreement will include a new playing surface and new irrigation system being installed and there are plans to further develop Rodney Parade over the period of the lease.

County moved from the Newport City Council owned Spytty Park after problems with a pitch former chairman Chris Blight had called "not fit for purpose".

The Exiles had negotiated a break-clause which allowed them to move back to Spytty Park if their ground share at Rodney Parade was not deemed a success.