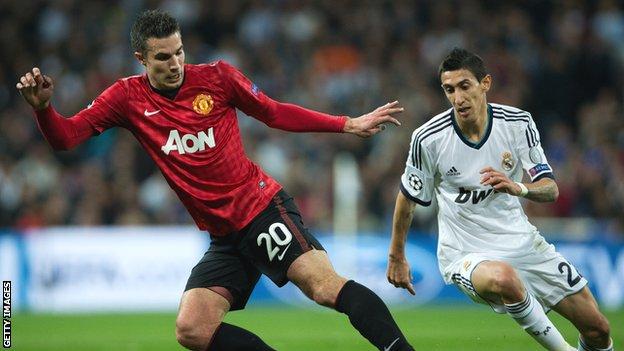 The Dutchman has a hip injury but should be fit for their Champions League tie at Old Trafford, which is after the first leg.

"Robin will be a huge loss if he's not playing, but it's about the team," Fortune told BBC Radio Manchester.

"I think it's United's time. They're hungry for success again."

Van Persie has scored 23 goals in his first season with the Premier League leaders, including three in the Champions League.

But he suffered a bizarre injury in hurting his hip after

The tale of the first leg

He may not be risked in the top-flight game against Norwich on Saturday, but manager Sir Alex Ferguson is hopeful that the 29-year-old will be fit to play in the second leg against the Spanish champions.

Phil Jones, who produced an excellent defensive display at the Bernabeu,

Fortune, who spent seven years at United, told Red Wednesday: "Robin's been a key player for the team and the job Phil Jones did over there in the first leg was outstanding. These are important players.

"It won't be easy but I do believe United are capable of beating Madrid without Robin and Phil."

One United player who continues to impress is Michael Carrick, who Fortune believes is growing into a senior role in United's midfield.

"It's not 'is Michael Carrick playing?' any more, but 'who is playing alongside Michael Carrick?'. He's always the first person selected in midfield and he's such an important player," said the former South Africa international, 35.

"You watch him every game and he does his work quietly but effectively.

"You can see his confidence is sky high with his passing range and that's why they signed him from Tottenham. He's definitely showing that at the moment."