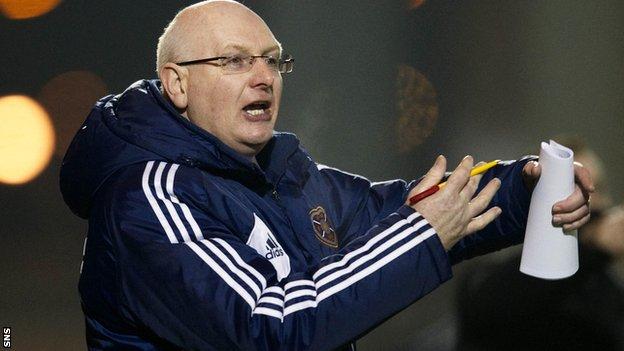 Hearts manager John McGlynn felt his side hit self-destruct at the start of their defeat to St Mirren in Paisley.

Darren Barr conceded an early penalty for the visitors after toppling Lee Mair at a corner.

"We gave ourselves a horrendous start. Individual errors are killing us," McGlynn told BBC Radio Scotland.

"An experienced player is holding another player in the box and we lose a penalty and give ourselves an absolute mountain to climb."

The 2-0 reverse in Paisley was a fourth consecutive league defeat for Hearts, who drop to 11th in the Scottish Premier League.

And McGlynn added: "We find ourselves a goal down when it's the absolute last thing we need.

"When you're not going through a good spell you don't want to give away cheap goals and give yourself a mountain to climb."

Paul McGowan's penalty was followed by an spectacular strike from 35 yards by St Mirren's Graham Carey.

Although much more spirited after the break, the visitors from Edinburgh failed to create anything clear-cut.

"We did a lot better in the second half but we didn't get that goal that might have given us a new lease of life to go and get an equaliser," said McGlynn.

"This is the situation we find ourselves in. A few weeks ago we were doing great. Now we've had a few defeats and that's when the test comes in.

"Every game's a must-win game."

Some sections of the Hearts support have criticised McGlynn for not playing a more attacking formation.

"I can understand their frustrations obviously," he explained.