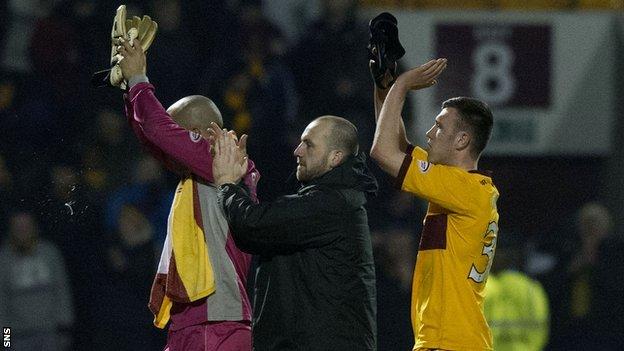 Victory over the division leaders moved 'Well second in the Scottish Premier League, days after McCall's side were humbled by Ross County.

"I'm really proud of the lads," said McCall. "They owed everyone and each other a performance.

"A great night's work. Every one of them played at a great standard."

Chris Humphrey and Michael Higdon were on target for Motherwell, with Georgios Samaras's header temporarily drawing Celtic level in the second half.

"We wanted desire, we wanted enthusiasm, we wanted work ethic and in the final third we wanted a bit of magic and I think we got all of them," explained McCall.

"It's all about points at the minute because you can be second one week and sixth the next."

James McFadden made his first start since beginninf his second spell at Fir Park and McCall was delighted with the forward's contribution.

"He got 70 minutes, he probably wanted to stay on a bit longer.

"He epitomised us. He got back, he won headers, he won tackles, he was good on the ball when he needed to be."