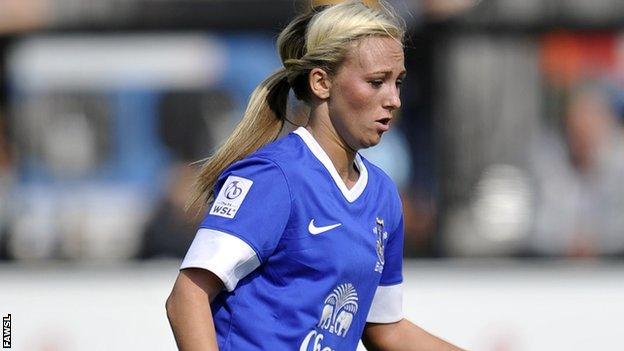 Everton Ladies forward Toni Duggan is tipping her side to be a force in the FA Women's Super League, despite losing big names in the close season.

The season begins in March and the Toffees face an early Continental Cup tie against rivals Liverpool.

During the close season Fara Williams, Natasha Dowie and Lucy Bronze left to join the Reds and Gwennan Harries departed to Bristol.

"We can't dwell on the players that we've lost," Duggan told BBC Sport.

"We've also brought in some new players as well, which is exciting to see. The team spirit is back and hopefully this season is going to be a big one and we can get back to playing the way we do."

Another blow during the close season was the news that Mo Marley was stepping down from her role as manager after 10 years in the job.

Her assistant Andy Spence has been appointed as boss and Duggan believes he is the man to continue Marley's legacy.

"It was a massive loss losing Mo. It was probably the biggest loss to the club - the girls were gutted," said the 21-year-old.

"But there was no better successor than Andy Spence, and I've said it before, he puts in as much time and dedication as Mo does. So nothing's changed in that respect and there is a lot of love and respect for Andy, so we want to do well for him as well."

The 2012 season was a breakthrough one for Duggan, as she was called into Hope Powell's England squad and named England Under-23 Player of the Year award.

"It was a good year personally and getting into the England set-up, I was made up," she added. "It's everyone's dream to get to the top but the hard work starts now.

"I've only been picked for the last three or four England squads and now my aim is to keep getting picked and do well for my club."