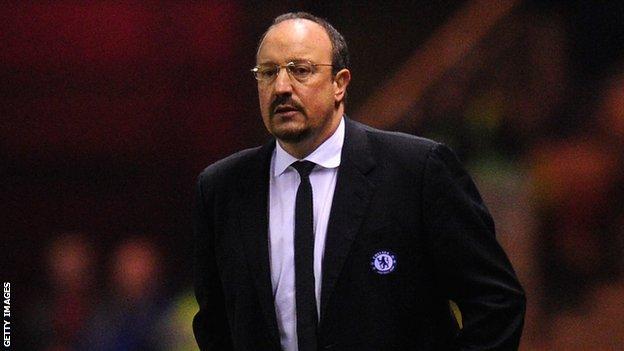 The former Liverpool and Inter Milan boss criticised the Chelsea fans for their lack of support and says it was a "massive mistake" to name him as an interim manager.

The 52-year-old Spaniard also at the end of the season.

It has been a difficult few months for Benitez, who and he suddenly chose to voice his frustration to 5 live Sport in an interview following his side's 2-0 win at the Riverside.

Read a transcript of Benitez's interview with BBC Radio 5 live reporter Alastair Yeomans in full below.

BBC Radio 5 live reporter Alastair Yeomans: "What was a difficult first half for you in the end turned out OK?"

RB: "I think that they were pushing so they were working hard so it was not easy but they were doing their job."

AY: "How important is this FA Cup to you now? You go to Manchester United next so there are no givens."

RB: "I think for us every game, every trophy is really important. I have been manager for 26 years, I have won the Fifa Club World Cup, the Champions League, FA Cup, a lot of trophies and I'm really a little bit disappointed with some fans, a group of fans singing and I think they are not making any favour to the team.

Benitez's 'fact' statement in 2009, responding to Sir Alex Ferguson's comments about the fixture list: "I want to talk about facts. I want to be clear, I do not want to play mind games too early, although they seem to want to start."

On Roy Hodgson succeeding him as Liverpool boss in November 2010: "Every single press conference is even worse than the last one. He is talking about things he doesn't know… some people cannot see a priest in a mountain of sugar."

On Everton in 2007: "When you play against the smaller teams at Anfield, you know the game will be narrow and compact. You could see one team that wanted to win."

"They gave me the title of interim manager, it's a massive mistake. I am the manager and I will manage the team until the end, every single minute.

"If they want to carry on wasting time with these things because they have an agenda, they have to take responsibility if something is wrong. It's not just 'I will blame this one, I will blame the other one', what they have to do is to support the team and then everyone has to stick together and we can achieve what we want to achieve - that is the Champions League. Simple.

"If not then next year they can carry on singing but we will be in the Europa League so they have to realise that they are not making any favour - to the rest of the fans and also to the players."

AY: "When you made the comments that they are talking about, some of them, you were fighting for Liverpool. There was a big rivalry with Liverpool and Chelsea, you'd expect you to say those things, is that what you're saying?"

RB: "I am a professional, I am doing my job and I will do my job. What I want to do is, I want to win every single game for Chelsea Football Club. But, if they don't understand this, at the end of the season, because I am interim, I will leave. They don't need to worry about me.

"At the end of the season, I will leave. They don't need to be worrying about me."

After talking to BBC Radio 5 live, Benitez continued on the same theme in his post-match news conference. Here are the selected highlights:

Speaking about Chelsea supporters, he said:

"If we cannot achieve what we expect to achieve, that is to be in the top four and be in the Champions League for next year, I will leave; they will stay in the Europa League."

"Again I will say, a group of fans, they don't realise - the rest of the fans, they want to see the team in the Champions League.

"This group of fans, they have an agenda, they say 'We are right'. They can be right at the end of the season, it's simple."

"The pressure he has been under since the first day he set foot in Stamford Bridge has come to a boiling point and he let it out last night.

"I think the protests have been very venomous against him - over the top in some place - but Rafa knew what was going to happen when he took the job in the first place.

"I think the interim manager bit was a massive mistake from him.

"He shouldn't have signed the contract or said "I'm not happy with this," because that is added pressure on him and the players obviously don't see him being there long term, so if you have that problem, it will fester in the club.

"Where do Chelsea go from here? That's the bigger question. If they get rid of Rafa, what will happen?

Who will take the job when so many managers have come and gone in the last ten years?

"They are damaging the image of the club and the rest of the fans because people think all the fans are the same.

"The Chelsea fans are really good, they support the team, but if they continue with their agenda, I don't think they do any favours to the team."

On whether he was hurt or surprised by the fans protests, he said:

"No. I am surprised, I have won nine titles, all the titles you can win at club level in three different countries so I have enough experience and have quality as a manager - but hear a group of people with an agenda carry on...

"They don't realise I will leave at the end of the season, they don't need to worry about me, they need to support the team. If they don't and we are not in the Champions league they can blame whatever they want but next year they will see the Europa league at Chelsea."

On being given the title "interim manager", he said:

"I am the manager and I will be the manager until the last minute until someone decides, 'No, you are not'."

"Everybody is interim because after you, there is another one. But in this case, they didn't have anyone, so why put 'interim'?

"It's just to say to everyone, 'Because he was in Liverpool and just in case, we will put interim and then we will wash our hands'."

"I didn't know about the title. Obviously, you have an agent, they have to talk in Spanish-English translation, and I was surprised.

On how the Chelsea hierarchy will respond to his outburst, he said:

"I think they will know that I am trying to do my best, that's it."