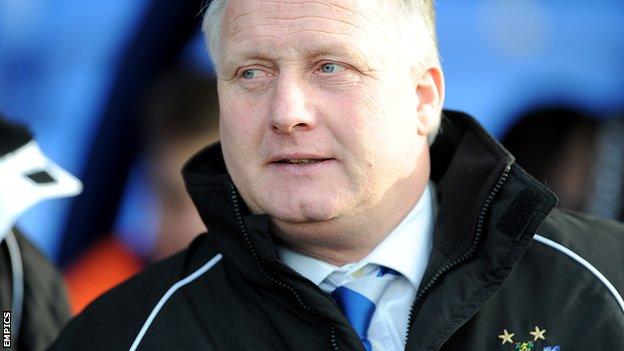 Bury manager Kevin Blackwell has said it was "apt" that his side were relegated shortly after their dire financial situation was made public.

A on Saturday, three days after the Shakers to survive, confirmed the drop to League Two.

"We've known this has probably been coming for weeks," said Blackwell.

"I suppose it's quite apt that it's come in a week when the whole thing has imploded at the football club."

Bury director David Manchester said prior to Saturday's game that the board had been "encouraged" by the response to the statement released on Wednesday.

He added that "positive talks" had taken place on Thursday and Friday, and would continue this week.

But Blackwell, who took over as manager at Gigg Lane in September, admitted he will be unable to begin planning for next season while the future of the club is in doubt.

"Until the club is saved, there are no discussions to be had," Blackwell told BBC Radio Manchester. "If the directors are right and there are some interested parties, we need them in sooner rather than later.

"We've got no numbers left - we really are at a point where something drastic and quick has got to happen."