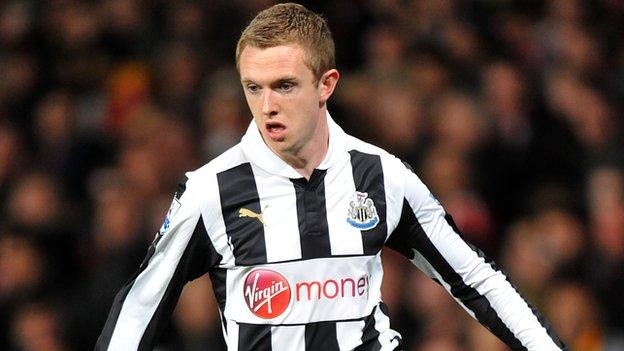 The 21-year-old Northern Ireland international, who can also play at full-back, has been signed to cover Blues' six games up to and including Easter Monday (1 April).

Teenager Hall has returned to West Ham for treatment on a groin injury.

The England Under-19 international has made 13 appearances for Blues since first arriving at St Andrew's in November.

But, having last appeared in the 4-0 home defeat by Watford two weeks ago, Hall's current loan spell ends on 16 March.

Lee Clark's Blues currently sit 16th in the Championship, now six points clear of the relegation zone, after losing just one of their last seven games.

Barnsley manager David Flitcroft has told BBC Radio Sheffield that Ferguson turned down the Yorkshire side in favour of a move to St Andrew's.

He is expected to make his debut at the KC Stadium on Saturday against promotion-chasing Hull City, managed by former Blues boss Steve Bruce.

Ferguson has made 14 appearances in all competitions for Newcastle this season, but he has not figured since coming on as a late substitute in the 7-3 defeat at Arsenal in December.