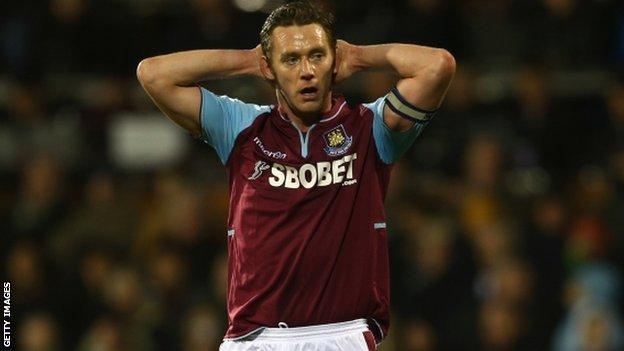 West Ham are set to be without captain Kevin Nolan for at least a month after he suffered a broken toe in Monday's 3-2 defeat by Tottenham.

The Hammers midfielder, 30, was substituted after 35 minutes following a tackle by Spurs' Mousa Dembele.

Reports claiming Nolan would be out for six to eight weeks are "wide of the mark," a West Ham spokesman said.

Nolan will miss Saturday's game at Stoke, which is one of only three matches for the Hammers in March.

As they are out of the FA Cup, Sam Allardyce's men are next in action at west London rivals Chelsea on 17 March, and then host West Bromwich Albion on 30 March after an international break.

He joined the Upton Park club from the Magpies on a five-year deal in 2011.