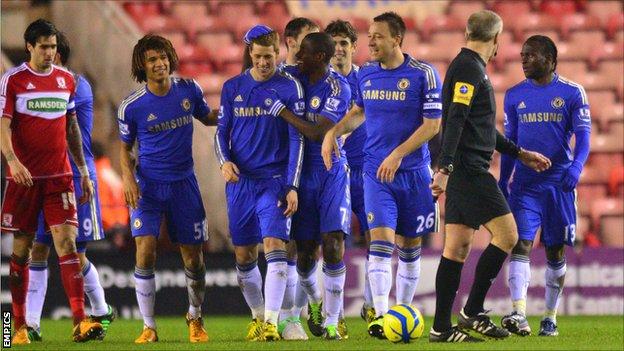 Middlesbrough boss Tony Mowbray says Chelsea's opening goal in Wednesday's 2-0 FA Cup loss was the crucial blow to his side's hopes of staying in the tie.

"We worked extremely hard, the team shape was good but we were undone by their first," Mowbray told BBC Tees.

"You could feel their quality but we stood up to it well."

Mowbray added: "It's good for our players to play against that quality, and we didn't just sit back and defend but they're hard to break down."

The visit of the Premier League side is followed by that of Cardiff City, who are on course to join the Blues in the top tier next season.

Boro are on a run of just one win in nine league games after Saturday's 2-1 home defeat by Millwall, having picked up only four points from a possible 27 in 2013.

"We are doing a lot of things right but we just need a break, we have to keep working," Mowbray added,

"Let's hope against Cardiff that break comes and we get the points."