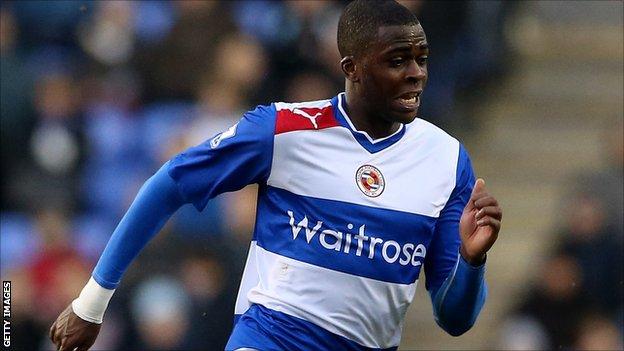 Reading midfielder Hope Akpan says he is 100% certain the club can stay in the Premier League this season.

The Royals, who travel to Everton on Saturday, are second-bottom after last weekend's 3-0 defeat by Wigan but just one point below the 17th-placed Latics.

And Akpan, who began his career at Everton, says with 11 games remaining he has total belief they can survive.

I don't have expectations, I just do my job. I didn't think where we would or wouldn't be

Akpan signed for the Royals in January from Crawley but came through the academy at Everton having joined them as an eight-year-old.

The 21-year-old admits to being excited at returning to Merseyside this weekend but says his main focus will be on helping his side earn maximum points.

"It's going to be an exciting game for me," he said,

"First and foremost I am a Reading player and that is my main focus. I'm happy to be going back to Goodison Park and am super excited. I was there since I was eight and I had a lot of experiences there but you have to live in the moment."

Reading have 23 points with Aston Villa and Wigan above them on 24. Akpan says the players are all confident of playing themselves out of trouble and are determined to bounce back from last weekend's disappointment against Wigan.

"Any loss like that is tough to take," he said,

"Obviously with the position we are in and the position Wigan are in it was even tougher to take. We just need to use that pain to help us get the points we need to stay up.

"It is very tight, there are a lot of games left to play and a lot of points to play for and we need to go into the game with the belief we can win it. We still have that belief."

With 11 games left remaining his manager Brian McDermott is refusing to be drawn on points totals saying he has set no targets for this team this season.

"I don't have expectations, I just do my job," said McDermott.

"My expectations are to do the best. I didn't think where we would or wouldn't be. I deal with the moment."