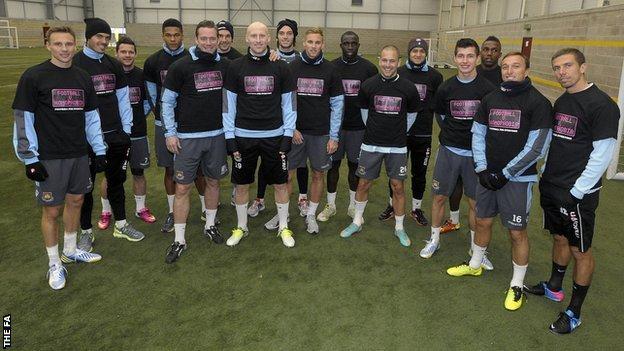 Minister for Sport Hugh Robertson has backed calls for professional football clubs to do more to combat homophobia.

Only 29 of 92 clubs are actively engaged in the 'Football v Homophobia' initiative which launched in February.

But campaigners are hoping 50% of clubs join the scheme by the end of March, with the Football Association issuing a toolkit to help them.

"The toolkit from the FA is a good initiative and I urge more clubs to use it," Robertson told BBC Sport.

"Discrimination of any kind must be stamped out. I want to see the football authorities increase their efforts to tackle homophobia.

"I was encouraged that their joint anti-discrimination strategy, published in December, includes action in this area as more needs to be done."

The toolkit, made public on 25 February by the FA and devised by Football v Homophobia (FvH), is intended to help clubs challenge homophobic behaviour while welcoming more lesbian, gay, bi-sexual and transgender (LGBT) people to football.

For example, the kit has ideas of how clubs can promote their anti-homophobia stance on matchdays, through tannoy announcements or messages in the club programme.

Eight of the 20 Premier League clubs are involved with FvH already, while 21 of 72 Football League clubs have joined the campaign, with Championship sides Birmingham, Blackburn, Huddersfield, Leicester, Millwall, Peterborough and League One Carlisle among clubs who have become engaged in the last month.

In addition to FvH's target, the FA is hoping that 150 professional and amateur clubs join the campaign in its anniversary year.

In 2012, all 92 professional clubs signed the government's voluntary Sports Charter against homophobia and transphobia.

But FvH's Megan Worthing-Davies said there is a danger that some clubs are paying lip-service to the issue, although she does acknowledge there has been an improvement.

"The charter on transphobia and homophobia in sport was very much a sign-up initiative," she told BBC Sport. "Now they need to do something to tackle this issue at their clubs.

"When the Justin Campaign first launched in 2010, we had about three clubs who were actively involved, and no Premier League clubs.

"Last year we had 24 involved, with seven from the Premier League so there is progress. We would like to see more clubs getting involved, and our hope is to have 50% of the 92 taking action."

On issuing the joint anti-discrimination plan at the end of last year, FA chairman David Bernstein said: "This is a commitment on behalf of English football to ensure the game is inclusive and free of discrimination."

But with other LGBT campaigns also running, the Premier League said it was up to the clubs which one they supported, while a Football League spokesperson said: "We wholly support the Football vs Homophobia campaign. All 72 Football League clubs have previously shown their commitment to work together to tackle this issue by signing the Government's charter on tackling homophobia and transphobia in sport.

"Following on from this Football League clubs have taken part in a number of initiatives as part of the Football v Homophobia campaign both on matchdays and through their work reaching out in to their wider communities."

Football v Homophobia is now run by Pride Sports and has taken over from the Justin Campaign to offer a broader agenda to tackle homophobia rather than focussing more on former Norwich striker Justin Fashanu.

Fashanu is still the only professional footballer in England to reveal he was gay whilst still playing and subsequently committed suicide in 1998.

In February, former Leeds and United States winger Robbie Rogers simultaneously revealed he is gay while announcing that he planned to "step away" from football.