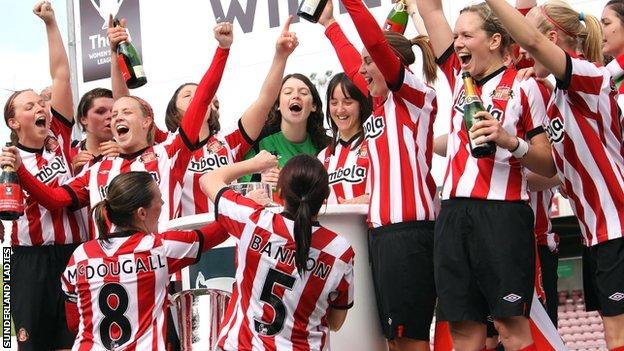 Manchester City, Sunderland, Aston Villa, Leeds United and Watford have all applied to be part of an expanded FA Women's Super League in 2014.

The league will jump from one tier of eight teams to two tiers of 20 as part of plans to boost the game in England.

Clubs have until Monday to apply, but BBC Sport understands at least 28 are expected to submit applications.

Manchester United, who do not have a women's team, have no plans to bid, while Tottenham and QPR have opted out.

The eight-strong WSL has been going since 2011, with Arsenal winning the title on both occasions.

They will be favourites to make it a hat-trick when the new season kicks off later this month, but face competition from current WSL teams Birmingham City, Bristol Academy, Chelsea, Doncaster Rovers Belles, Everton, Lincoln Ladies and Liverpool.

Sunderland chairman Maurice Alderson told the BBC that he expects a hard fight for inclusion into an expanded WSL after failing to gain entry when the league was first formed.

"The competition will be fierce," he said. "We missed out on the Super League in the first bid process and the disappointment was unbelievable but we have some super partners now."

Manchester City and Sunderland currently compete in the Premier League, which is the division below the WSL.

They will be joined by Coventry, Leicester and Barnet in attempting to gain a place in WSL 1. Watford and Aston Villa, who also play in the Premier League, are targeting a spot in WSL 2.

The current eight WSL teams must submit applications to remain in the new-look set-up and could lose their top-flight place if their bids are not deemed strong enough or are bettered by others.

The WSL is semi-professional and began in 2011 when it switched from its traditional slot on the football calendar to a summer season.

Over the last two years, it has seen a growth in attendances, while nearly every member of the England and Great Britain squads play for Super League teams.

The Football Association hopes that the introduction of two tiers - with promotion and relegation - will increase competition and grow the game in more areas.

The move is part of the FA's five-year plan to develop the game, with the governing body pledging to invest a further £3.5m over the next four years.

But, as part of their applications, clubs must show how they will match the funds being offered by the FA.

A team that does not meet the criteria for inclusion in WSL 1 can still claim a licence for WSL 2.

An independent panel will announce in June which clubs have won a place in the expanded league.

Clubs will be assessed on everything from financial management and marketing through to the quality of their coaching staff.

The committee will decide whether to grant licences to eight or 10 teams in the top tier, with the second division featuring 10 or 12 teams as a result.

Tottenham, who play in the third tier Premier League South, took the decision not to submit a bid this week - saying it is not viable for them, even though they receive £25,000 in funding from the men's team.

Premier League side Cardiff are not allowed to bid because of their Welsh status, despite currently playing in an English league, while enquiries have been made to the FA by teams below the third tier.

Manchester United, who have not had a women's team since 2005, say their efforts are focused on girls' football as a "community activity".

The club run a centre of excellence through the Manchester United Foundation and say that helps girls who want to stay in the sport find an open-age team when they reach the end of their time in the centre.