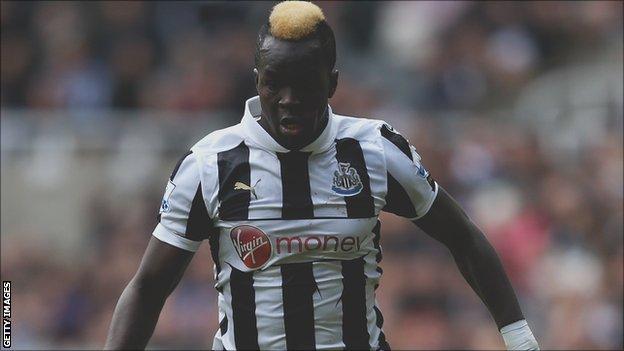 Newcastle United midfielder Cheick Tiote has said competition within the squad has lifted the performance levels at St James' Park.

United have won four of their last five league games since signing six players in January, ending a six game-run without victory in the process.

"With the squad how it is right now, everyone has to fight for their place," Tiote told BBC Newcastle.

Sissoko's arrival from Toulouse in January has prompted three goals in six games for the Magpies.

The France international has slotted neatly into Newcastle's squad.

"He's a good player, doing a good job and it helps the team," Tiote added.

"He is strong up front, we lost Demba Ba in the transfer window and we were looking for someone to keep hold up the ball up there.

"It's good for me and Yohan Cabaye as he has come into help us in midfield too."

"There's competition, and we all have to train and play well, which is good."

Tiote's arrival from FC Twente in August 2010 for fee in the region of £3.5m showed the merit of utilising the foreign market for players, and Newcastle have been major exponents over the last few seasons.

The quintet of French players that arrived on Tyneside in January - Mapou Yanga-Mbiwa, Yoan Gouffran,. Massadio Haidara, Matthieu Debuchy and Moussa Sissoko - were all internationals at senior or Under-21 level, but cost £6.7m or less.

"It was important for the club to sign some players, we didn't have enough players in the squad when there were lots of injuries," the Ivory Coast international added.

"That's why we didn't play well and lost some games, but we've signed some good players, [Yoan] Gouffran, [Moussa] Sissoko and [Matthieu] Debuchy, and they're doing a good job for the club.

"It's good for everyone."