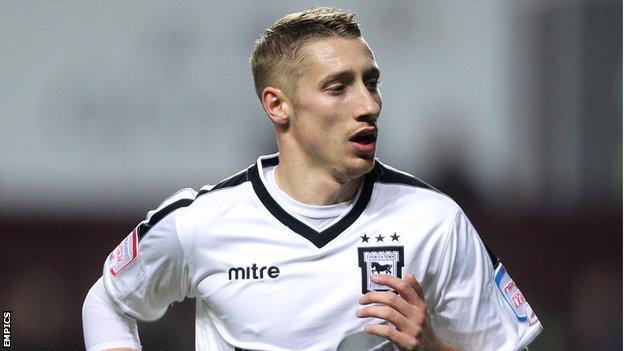 Ipswich Town winger Lee Martin has said he wants to sign a new deal and remain at Portman Road beyond the summer.

The 26-year-old is set to be a free agent at the end of the season, but is focussing on Championship survival.

"I want to stay. I've said that from the off, when it first came up in August," he told BBC Radio Suffolk.

"But the current situation probably doesn't allow us to go into contract negotiations until we climb away from the bottom."

Martin took time to settle in at Ipswich after arriving from Manchester United four years ago and had a spell on loan at Charlton in the first half of the 2010-11 campaign.

But he had his most productive season in a Town shirt last term, featuring 35 times, and has made 33 appearances in the current campaign.

And while there are negotiations over a new deal, the midfielder does not expect a contract to be confirmed until Town increase their four-point gap over the relegation zone.

"Not in the current situation where we're at, no. I'm sure the club will say that too," he said.

"We're talking. The discussions haven't stopped. I think it's been put off to see where we finish up.

"You just come in and get your head down and work hard. There are more pressing issues to worry about than contracts."