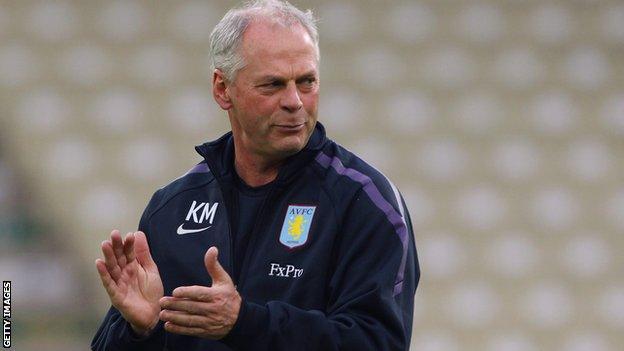 Swindon Town have appointed Kevin MacDonald as their new manager.

MacDonald will be officially unveiled by the League One side at a County Ground press conference on Friday.

MacDonald has never held a managerial job but has had caretaker roles, first at Leicester City, then with Aston Villa, where he worked on the backroom staff until leaving last summer.

The former Leicester and Liverpool midfielder ended his 17-year association with Villa following Alex McLeish's departure in May 2012 and following the arrival of new manager Paul Lambert.

"This is a hugely important appointment at a significant moment in Swindon's recent history and we are delighted to appoint a football man of Kevin's calibre as our new manager," said chairman Jed McCrory.

"Kevin has fantastic football credentials as a double winner with Liverpool during his playing days and he is an excellent coach.

"This is a clear message that the new board is determined to drive on for promotion this season and continue to try and bring success to Swindon."

Di Canio took over at Swindon in May 2011, leading them back up to League One as champions at the first time of asking.

Swindon's impressive form has continued this season, as they are fourth in the table, three points off the top, but Di Canio became disillusioned by the club's off-field problems and resigned on 18 February.

His reluctance to invest any more money into the club left them on the verge of administration, but their future was secured by a consortium - led by Banbury owner McCrory - who officially completed their takeover on 21 February.

But the board were forced to sell talisman Matt Ritchie to Bournemouth for £500,000 in a bid to raise immediate funds - a move which prompted Di Canio's departure.

Di Canio's assistant, Fabrizio Piccareta, oversaw their 3-1 win over Tranmere but he and the backroom staff resigned the following day.

Defender Darren Ward and midfielder Tommy Miller, both 34, were then named caretaker managers and took charge of the 1-1 draw with Preston and Tuesday's 1-0 defeat by Bury, which ended Swindon's 13-match unbeaten run.