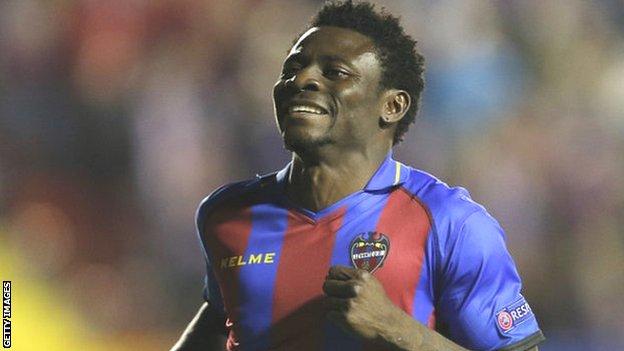 Obafemi Martins' move to Major League Soccer club Seattle Sounders is on hold, with a deal now unlikely to be completed until next week at the earliest.

It had been thought that the Nigerian would complete his move from Levante on Saturday after he agreed terms with the MLS side earlier in the week.

Martins was expected to leave for the United States on Friday but was then included in the Levante squad for Saturday's La Liga derby with Valencia.

The former Newcastle and Birmingham City striker has revealed that the move is on hold.

"There's a little delay but I'm optimistic everything will be resolved soon," Martins told BBC Sport.

"It is only a minor misunderstanding. Hopefully we can sort it out by Monday."

The Nigerian joined La Liga side Levante after a disappointing stint at Russia's Rubin Kazan, where his time was blighted by injuries and loss of form, forcing the team to banish him to the reserves.

Martins took a massive pay cut to seal a move to Spain and get regular football.

If the plan was to win over his many critics via decent performances in the Spanish league, the concept has clearly worked out for the Super Eagle.

He has revived his career at Levante, scoring the winner on his debut and going on to net eight further goals in 22 appearances.

"It's been a good time here and I've enjoyed my moment at this club," he said.

"The fans have been very supportive and I will always cherish that."

Martins, who began his career in Nigeria with FC Ebedei, has also played club football in Italy.