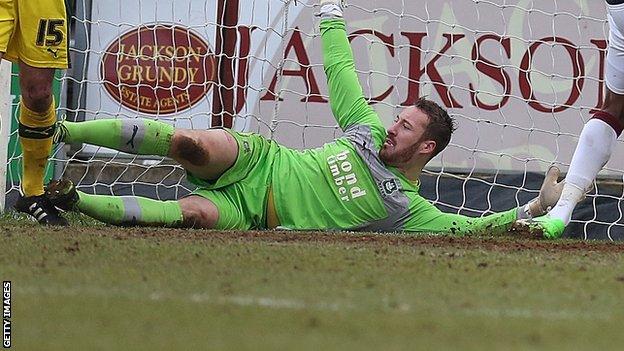 Cole has successfully fought relegation from the Football League in each of the past three seasons - twice with former club Barnet and once with Argyle.

"I think if you look at the squad, we've got enough to do it," the 27-year-old told BBC Radio Devon.

"I think if you look through it there's a few experienced players there and some really good youngsters."

He helped the Bees beat the drop by four points in 2010, before being part of the side which having been in the bottom two for much of the campaign.

It was a similar story with Argyle last term as the club, reeling from a 10-point penalty received for going into administration, came back from spending the first half of the season rooted to the foot of the league to

"It's been the same kind of thing the last few seasons," Cole said.

"We've got 12 games left now and there's a few teams in and around it so hopefully we can hit the form now to keep us safe."

And while some players shy away from looking at league tables in order to focus on their own performances, Cole insists that checking where his side are placed is crucial.

"I look at the table after every game to see where the results have gone," he continued.

"You don't think who you're going to finish above - you just hope to hit the form that's needed to get you the points you need."

Argyle lie three points adrift at the bottom of League Two but, with only seven points covering the bottom eight clubs, Cole feels any team in that part of the table can secure survival.

"Back-to-back results change everything at the click of your fingers," he added.

"From being at the bottom you can end up moving five places, it's that tight. It's just a bit of form - there's 12 games to go and hopefully we're the team to get it."