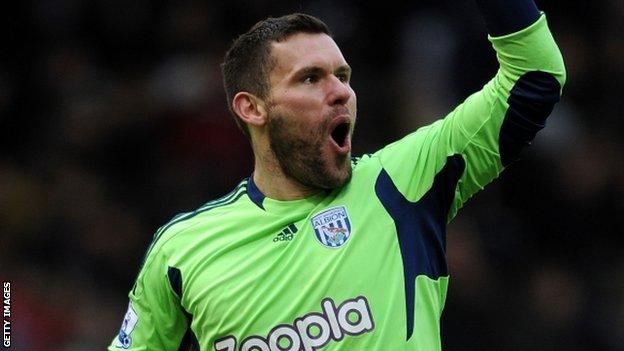 West Bromwich Albion goalkeeper Ben Foster has made himself available for England selection again, potentially ending a two-year absence from the national team.

Foster, 29, announced in 2011 that he was taking a break from international football for an indefinite period.

But the Albion man is now available for next month's World Cup qualifiers in San Marino and Montenegro.

The former Manchester United and Birmingham keeper has been in good form recently and impressed in the 2-0 win at Liverpool, where he produced a brilliant penalty save to deny Steven Gerrard.

England coach Roy Hodgson, who managed Foster at West Brom, tried to persuade the Baggies keeper to perform a U-turn last summer so that he could be included in the squad for Euro 2012, but the player declined.

Manchester City's Joe Hart is the current England number one, but his form has come under scrutiny in recent weeks.

Norwich's John Ruddy is injured, having also missed Euro 2012 with a broken finger, while Stoke's Jack Butland might be called up to the England Under-21 squad by manager Stuart Pearce for this summer European Championship.

Celtic's Fraser Forster was in the squad for the qualifiers against San Marino and Poland and the friendly against Sweden, but recently conceded three goals to Juventus in front of Hodgson, who was in the crowd.