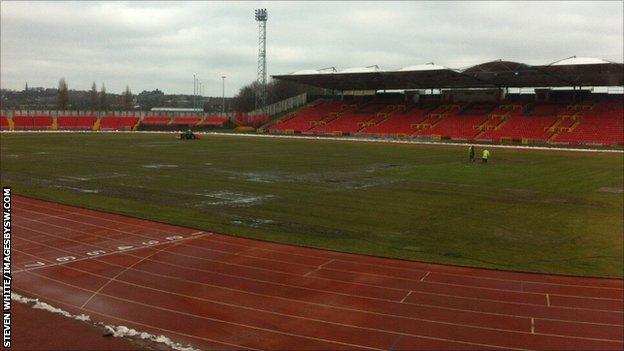 Gateshead have confirmed no further home fixtures will be staged at the International Stadium this season because of playing surface issues.

Issues with drainage after the recent adverse weather have forced the club to seek alternative venues.

Hartlepool's Victoria Park will host seven games, including Saturday's visit of Braintree, with the visit of Kidderminster at York on Tuesday.

Blyth's Croft Park will stage the visit of Hyde on Saturday, 9 March.

Special dispensation was given by the league to use Blyth's home ground, as it is a B grade venue when Conference regulation stipulate only A standard venues are suitable.

The venues for the outstanding games against Luton Town and Ebbsfleet United will be announced at a later date.

Rugby league side Gateshead Thunder, who are fellow tenants of the ground, have of the season against North Wales Crusaders to Hull KR's Craven Park.

They have also confirmed they will be seeking alternative venues for their fixtures with the pitch in its current condition.