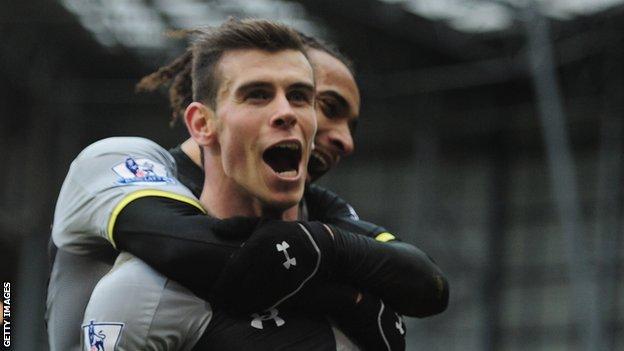 Gareth Bale is in no rush to leave Tottenham, according to former Spurs captain Ledley King.

Bale, 23 has been described as the world's third-best player after scoring eight goals in his last six games.

"He's enjoying it at Spurs. I wouldn't see him in any rush to leave," King told BBC Sport.

Asked if Bale would be the decisive figure in Sunday's north London derby, King said: "I think so. Arsenal will be wary of him and the threat he poses."

Bale has been linked with a big-money switch to Spanish champions Real Madrid because of the quality of his recent performances.

These rumours appeared again after he played a key role on Monday against West Ham, opening the scoring with an incisive low shot before striking a stunning last-minute winner.

Former Tottenham and England centre-back King, who was forced to retire at the age of 31 last summer after years of problems with a debilitating knee injury, is convinced these displays put Bale alongside Barcelona's Lionel Messi and Real Madrid's Cristiano Ronaldo as the sport's leading performers.

"Gareth is in the top three players in the world on current form," he said. "I really enjoyed playing with him. Last season was his best to date and now he is taking it to another level."

The result at Upton Park re-established Tottenham's four-point lead over Arsenal ahead of a game which could prove crucial to both clubs' hopes of finishing in a Champions League qualification place.

King on life after football

"Coming away from the game I am grateful Tottenham have allowed me to continue to work for the club as an ambassador.

"Walking around I am fine [despite the knee injury], but if I get a bit excited when I see a ball and do something it quickly reminds me why I retired!

"I will be at the game on Sunday like a fan. It is the first home game against Arsenal since I retired so I am very much looking forward to it."

Tottenham have not ended a Premier League season in front of their north London rivals since 1995, but King believes this run will come to an end in May as Spurs have the stronger squad.

He said: "It has been long enough [Tottenham ending the season behind Arsenal], and it did not happen while I was playing. I think this is finally the season where we can finish above our neighbours.

"I think Tottenham do have a better squad. Obviously, both teams have quality players but I think maybe Tottenham's squad is stronger."

Manager Andre Villas-Boas has impressed since arriving at White Hart Lane in July, and King praised the Portuguese's impact after a difficult previous spell at Chelsea.

"The players love him and that is so important," he said. "We have seen the passion he shows on the sideline - every goal the team scores he celebrates.

"For any young, foreign manager, coming from abroad to the Premier league is tough, yet alone to Chelsea. He has the chairman [Daniel Levy] behind him and we are seeing what he is made of."