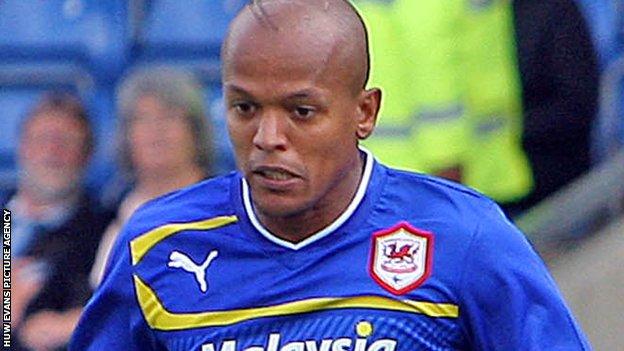 Wales striker Earnshaw has confirmed he is moving to Canada to join the Major League Soccer side.

"There's a tiny bit of paperwork to be done but it's not something that's going to hamper either party doing the deal," Mackay said.

"Robert will go there and he needs to get his career started again and I wish him all the very best."

Mackay added: "Toronto's a lovely city and I hope he does well."

Earnshaw, who has won 59 Welsh caps, has not featured for Championship leaders Cardiff this season.

The 31-year-old rejoined Cardiff, where he began his career, on a free transfer from Nottingham Forest in July 2011.

He had a loan spell at Israeli side Maccabi Tel Aviv towards the end of 2012, but returned to Cardiff in the new year.

The ex-West Bromwich Albion, Norwich and Derby County is the second Cardiff striker to leave for an MLS side during the past year.

Certainly a move to the MLS is, you would say, more of a lifestyle move than a professional career move

"There comes a point I suppose in people's careers where they look at lifestyle moves," Mackay added.

"Certainly a move to the MLS is, you would say, more of a lifestyle move than a professional career move. I don't think I'm harsh in saying that.

"There comes a point in a player's career where they decide that's the line they want to go down and that's what he's done."

Cardiff, who are eight points clear of second placed Watford in the Championship, travel to Middlesbrough on Saturday.

And Mackay will be without captain Mark Hudson who has been ruled out of the trip to the Riverside.

"Mark's turned his ankle and will be out for a couple of games," Mackay confirmed