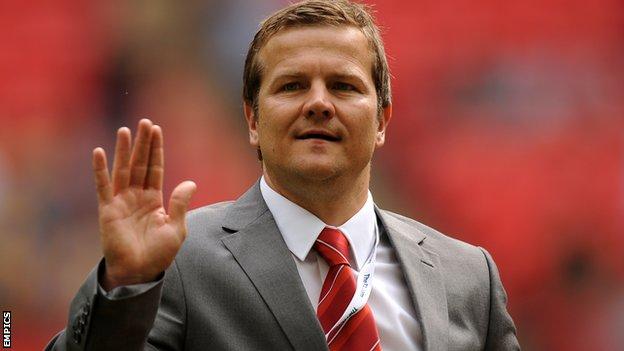 Cooper had only been at the Bucks Head for 30 days, having succeeded Andy Sinton on an interim, expenses-only deal until the end of the season.

But his team failed to win a game in his five games in charge, picking up just a point to fall to the bottom of the Blue Square Bet Premier.

Sinton's number two Graham Hyde will be caretaker until the end of the season.

"I'm shocked but we've just got to get on with it," chairman Lee Carter told BBC Radio Shropshire. "Just like we have with a lot of the things that have been thrown at this club in my time here. But I actually wish Mark Cooper all the best.

"Having been out of work for 12 months before he came here, we took him on a non-contract basis to earn a few pennies, and I mean a few pennies, as it was an 'expenses only' interim arrangement.

"He was a pleasure to work with and he deserves this chance.

"From the brief snatches of conversation I've had with him, he's almost embarrassed about it but he shouldn't be.

"There isn't anyone in football who wouldn't take a a job with greater security, more money and a bigger opportunity. And he should relish the challenge he's landed himself."

MacDonald was named manager at League One Swindon on Thursday, following the resignation of Paolo Di Canio in February.

Telford are four points adrift at the foot of the Blue Square Bet Premier ahead of Saturday's trip to Mansfield, having not won in 21 league matches since 9 October.