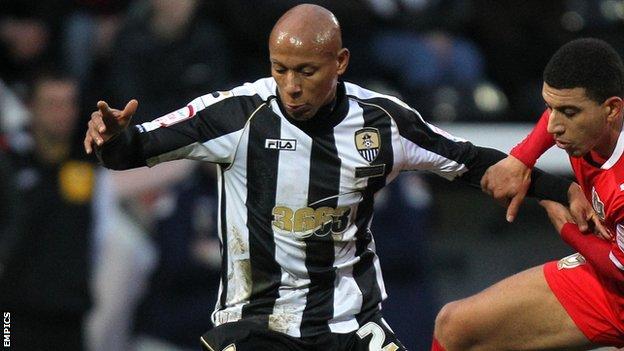 Coventry City have signed midfielder Jordan Stewart on a free transfer before being placed under a transfer embargo for the third season running for failing to file accounts.

The managerless Sky Blues have signed the experienced, Birmingham-born Stewart on a three-month contract.

Since starting his career at Leicester City, where he was a part of their Premier League promotion-winning side under Micky Adams in 2003, Jordan Stewart has played for Watford, Derby County and Sheffield United, Greek side Xanthi, Millwall and Notts County.

The much-travelled 30-year-old former Leicester City and Watford man has signed until the end of the season.

The deal was done ahead of the embargo and ratified by the Football League.

Stewart had been a free agent since ending a short stay at Notts County in January, and will stay at the Ricoh Arena until 28 May.

By then, Coventry, who are still to resolve their year-long rent row with Ricoh Arena owners ACL and are still to appoint a successor to manager Mark Robins who left 15 days ago, hope to be in better financial shape.

But the promotion-chasing League One club's bank accounts were frozen earlier this month.

Fisher told BBC Coventry and Warwickshire: "We are under unbelievable external pressure.

"The real challenge is actually accessing revenues to be able to put a reasonable team on the pitch next season,"

"Frankly, if we don't get those revenues the club will go into a downward spiral."

Asked if the point was not approaching when the club would have to cease trading, Fisher replied: "That's a very valid comment.

"It's a question of how long does our lawyer's patience last.

"We talk to them every day, we talk to our insolvency practitioner every day and they are deeply concerned."

Both previous failures to file their accounts on schedule resulted in transfer embargos, the latest having been lifted last summer, while City were also banned from signing players for the first five months of 2011.

And Fisher warns that, whatever happens on or off the pitch, the club will be under a transfer embargo next season, having overspent on salaries.

"Next season we will be under a transfer embargo," he said. "We are way in excess of the salary cap that we would be applying on the revenues we have today and which are projected for next season."