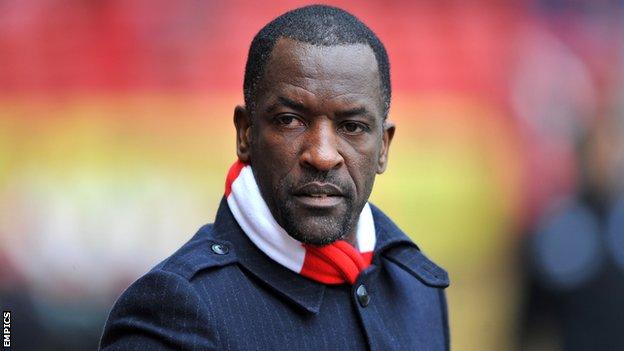 Charlton Athletic manager Chris Powell says he is at a loss to explain their under-par home form this season.

The Addicks have only won four of their 17 Championship games at The Valley.

He told BBC Radio Kent: "The players go out there and we have had crucial moments that have gone against us. But that is the nature of the game we love.

"We have just got to hang in there. I really want us to have a big push in the remaining six home games to give our fans the lift they deserve."

The Addicks have picked up 43 points from their 34 Championship games, and sit eight points above the relegation zone. But the majority of their points have come away from The Valley.

He added: "It just so happens we have the fourth-best away form in the Championship, which is sensational for us when you look at it.

"We'll have a review at the end of the season and no doubt I will be saying I want to make The Valley a winnable place for us again."

Charlton only lost two league games at the Valley last season on their way to winning the League One title.

But this season they been beaten seven times in south east London, while they have picked up more points on the road.

Asked whether he was frustrated by their home form in their first season back in the second tier, Powell replied: "Of course, extremely.

"Home is where the heart is. It's our pitch, our stadium and where our supporters come to support their team.

"It's just the way it has gone this year.

"It's just one of those seasons where, if our home form had been a touch better, we would be a number of points better off.

"We'll get on with it. We've just got to make sure we do our best to turn it around."

Charlton have picked up 43 points from their 34 league games this season and currently sit eight points above the bottom three.

"Everyone talks about 50 points [to avoid relegation] but I think it will be a bit more this year because of the nature of the league," Powell said.

"It is very tight and the players know exactly what they need to do in the remaining 12 games."