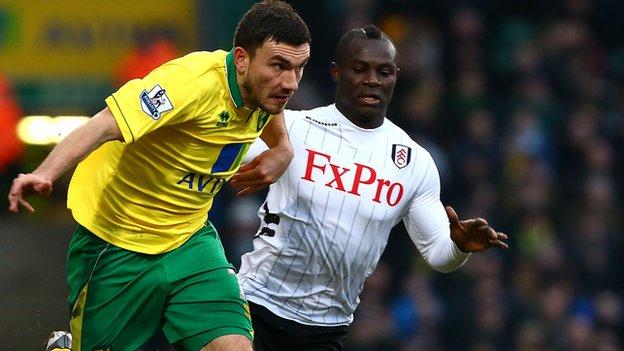 Fulham boss Martin Jol says he would like to sign Ghanaian midfielder Emmanuel Frimpong on another loan deal from Arsenal.

The 21-year-old has made only one appearance for the Cottagers since he arrived on a six-month loan but Jol remains keen on the player.

"If I could take him on loan again, I probably would," said Jol.

"He is versatile and he has a good mentality. I was impressed with him from the start. "

Frimpong joined Arsenal aged nine and shone during his progression through the youth ranks, helping the Gunners to FA Youth Cup glory in 2009.

He made his debut for the north London club in August 2011, but two serious knee injuries, plus a lack of discipline on and off the pitch, have hampered his progress.

Frimpong was sent off during his first full appearance for Arsenal and was involved in a tunnel bust-up with Samir Nasri when the Gunners played Manchester City last season, but Jol has no problem with the midfielder's attitude.

"We spoke about (discipline)," Jol said. "In my day you could tackle, but now you have to stay on your feet.

"Two years ago I saw him and he is the type of player you would like as a manager. He can play as well, he is an Arsenal player. He is one of the few players who has been at Arsenal since a young age.

"I think Sunderland away would suit him. His fitness is getting better and better. He did well when he played for us against Norwich. He is fully fit now so I can play him from the start if I want to."