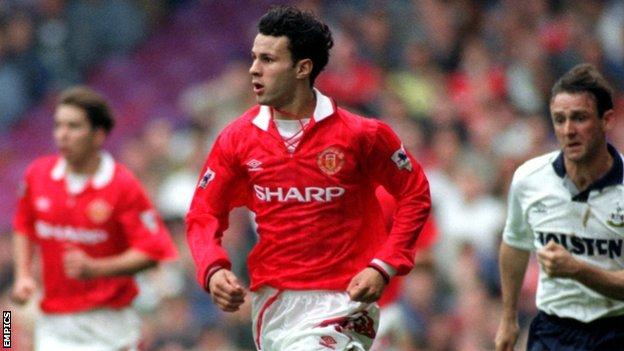 He is the most decorated player in English football history, Manchester United's record appearance holder and has scored more goals for the Red Devils than Mark Hughes, Paul Scholes and Cristiano Ronaldo.

Giggs became the fourth outfield player to play in the Premier League at the age of 40, joining:

As Ryan Giggs begins life as a retired footballer he can reflect on an extraordinary career spanning more than 1,000 games and 150 goals over 22 long seasons.

The Premier League did not exist when he made his debut for Manchester United. John Major was prime minister, Bart Simpson was number one in the charts, the Birmingham Six were still in jail and Kevin Costner was about to clean up at the Oscars with Dances With Wolves.

BBC Sport takes a look at the key statistics and memorable moments of his career.

17 - Giggs was offered his first professional contract with Manchester United on his 17th birthday on 29 November, 1990.

*does not include friendlies

632 - Giggs has made 632 appearances in the Premier League, starting 522 of those matches. He made his debut against Everton on 2 March 1991, coming off the bench to replace full-back Denis Irwin in a 2-0 defeat.

37 - When Giggs smashed the ball into the top corner of the Benfica goal on 14 September 2011, he became the oldest scorer in the Champions League at 37 years, 289 days.

109 - Since scoring his first Premier League goal against Tottenham in a 1-1 draw on 19 September 1992, Giggs has gone on to hit the back of the net a further 108 times in the league. This season was the first since the start of the Premier League during which he failed to score.

3 - Giggs has won three BBC Sports Personality of the Year awards - clinching the main award in 2009, while also winning the BBC Wales award in 1996 and 2009.

0 - He has never been shown a red card during his club career, although he was once sent off for Wales, against Norway in September 2001.

What they said about Ryan Giggs

"I remember the first time I saw him. He was 13 and he floated across the ground like a cocker spaniel chasing a piece of silver paper in the wind" - former Manchester United manager Sir Alex Ferguson

"He's an outstanding player and it's a privilege to be working with him on my staff. I've seen something different since I've come here - just how good he is, close up - and it's incredible" - former Manchester United manager David Moyes

"Ryan Giggs for me is one of the best players in the world. Now maybe he is old but he is a fantastic player" - former Manchester City manager Roberto Mancini

"Eric Cantona is a great player, but he's not as good as Ryan Giggs" - Dutch legend and three-time world player of the year Johan Cruyff

"Only two players made me cry when watching football, one was Diego Maradona and the other Ryan Giggs" - Italian World Cup winner Alessandro Del Piero

"Every day of the week, every week of the year for the last 15 years he has been a top player" - former Cardiff manager Malky Mackay.

A sight that was to be repeated many times over the next two decades as an 18-year-old Giggs produced a classy finish against Tottenham. A defensive error allowed him to seize possession 30 yards out, before he got the better of a Spurs defender, rounded goalkeeper Ian Walker and fired home from an acute angle.

A stunning strike by Giggs as he whipped the ball away from Ray Wilkins and raced towards goal before smashing a left-foot shot past Czech goalkeeper Jan Stejskal.

A truly memorable goal as Giggs took a leaf out of Maradona's book by taking on the entire Arsenal defence. His skill and courage were rewarded as he beat four Arsenal defenders and smashed the ball past David Seaman to send United to Wembley.

A win that secured United their 17th league title, and fittingly it was Giggs who clinched it, taking Wayne Rooney's clever pass in his stride to slide home a composed finish from 12 yards.

A memorable goal in that it marked one of the many milestones Giggs has achieved in his career - scoring for 23 successive top-flight seasons. Giggs scored from 12 yards via the post to set the Red Devils on the way to victory.