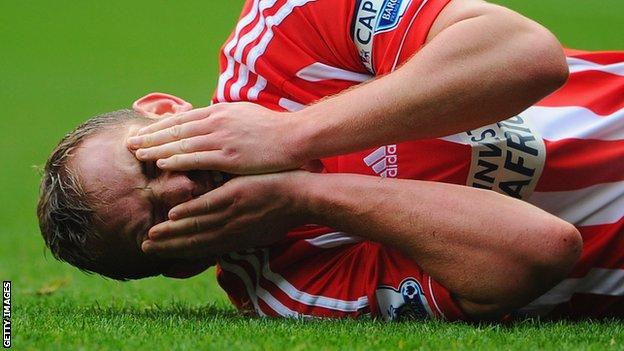 Sunderland manager Martin O'Neill is refusing to rule out surgery for Lee Cattermole to cure a knee problem.

Midfielder Cattermole has been limited to just 10 Premier League starts during an injury-troubled season.

The 24-year-old visited a specialist this week and was given an injection in the hope of solving the problem.

Sunderland with Cattermole in the side this season

Sunderland have won just one of the 10 Premier League games Lee Cattermole has featured in this season, a 3-1 triumph at Fulham on 18 November

But asked whether his captain may require an operation, O'Neill said: "That has been mentioned, but we shall see. That might be the case."

Catttermole has not featured since the 1-0 home defeat to Arsenal on 9 February.

O'Neill added: "I wouldn't start to draw too many conclusions from that at the moment.

"He went to see the specialist and he has given him an injection. At this moment, he is hoping in the next couple of weeks that that would cure things.

"But if it didn't do, then we might have to have another look at things."