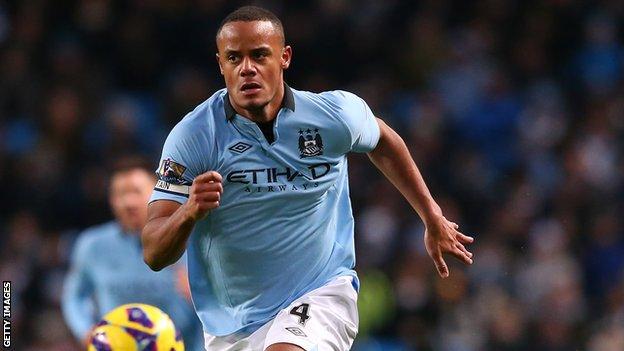 Kompany hurt his calf in City's 1-0 win at Stoke on 26 January - his second calf problem in the last year.

"Vinnie is getting better. We hope [he will be fit] for the next game. We will try for Villa on Monday but it's difficult," said Mancini.

"He didn't train with the team. He was with the physio."

It was originally thought the Belgian centre-back would return from injury against Chelsea on 24 February but his recovery has taken longer than expected.

"The calf is a difficult injury because you think [it is] OK at the start and then have a problem," said Mancini.

City have won only one league game in his absence as the gap between themselves and rivals Manchester United has widened to 12 points, leaving the FA Cup as their only realistic chance of silverware this season.

City host Championship side Barnsley next weekend knowing victory would give them a second FA Cup semi-final appearance in three seasons.

And the Italian could yet win silverware in two competitions, as he is not ready to relinquish their Premier League title, citing last season's comeback as proof that it can be done with 11 games remaining.

"There are another 11 games so it's impossible [to give up] - we do out best from now until the end and after we see what happens," he said.

"Every game is like this. If we lose or don't win and Manchester United win their next game it will be difficult.

"Last season we won with six games to go. It is possible."

City were eight points behind United with six games remaining last season after a 1-0 defeat by Arsenal., but fought back to win the title.