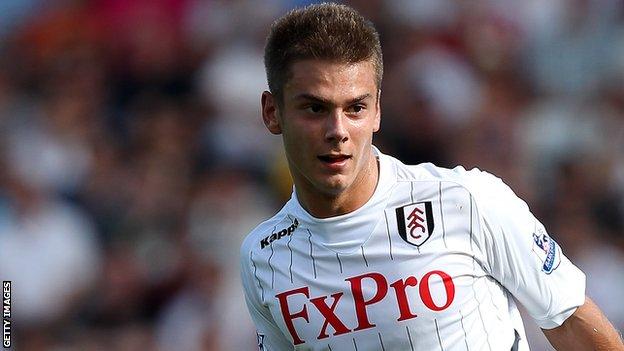 Burnley have completed the loan signing of Fulham midfielder Alex Kacaniklic for the remainder of the season.

The 21-year-old Sweden international is eligible to make his debut against Charlton at The Valley on Saturday.

Kacaniklic has played 19 times for Fulham this season but has not featured in the Premier League since 12 January.

Earlier, Burnley confirmed defender with the Clarets, keeping him at the Championship club until 2015.

Kacaniklic played under Burnley boss Sean Dyche and scored his only goal for the Hornets against the Clarets at Vicarage Road in March.

Dyche, who has made Kacaniklic his first signing at Turf Moor, told the club website: "He is an exciting young prospect and something different to what we have, which is important. He's dynamic and can mix up his game.

"It's a good link with Fulham. They know their player was looked after at Watford. He is aware of us as a staff and knows he will get looked after here.

"That's one of the key things. We do look after players here. We look to develop our own and anyone who joins us."