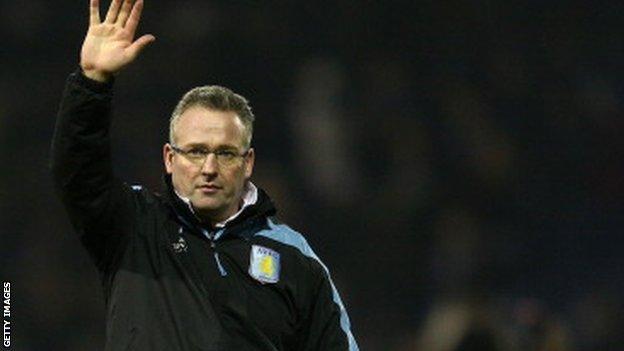 "I knew it was going to be a tough job here. Randy told me that from day one," Lambert said.

"You either deal with it and meet it head on or you roll over and die with it. I always meet things head on."

Lambert said: "It's a great challenge, but it's a brilliant challenge for us to go and rectify it."

The 43-year-old has been encouraged by Villa's recent performances despite the 2-1 defeat at Arsenal last weekend which saw Villa slide back into the bottom three for the fourth time this season.

Lambert also denied speculation that discussions with striker Andreas Weimann over a new contract had not progressed. The Austria international has scored 10 goals this season and has 17 months left on his contract.

The Villa boss is keen for the player to stay and despite reports indicating otherwise believes Weimann is happy at the club.

Lambert said: "Have contract talks stalled? No, we are still talking.

"Contrary to reports, I spoke to Andi the other day about it and he has never once indicated what the report said."