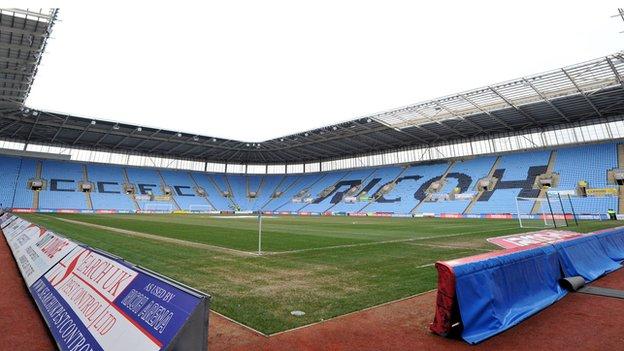 Coventry City are making light of their off-field financial woes as they close in on the appointment of a new manager.

Keith Curle, Paul Dickov and former Sky Blues boss Eric Black are understood to be among four names on their shortlist.

But development director Steve Waggott insists that concerns over their future are not impacting on that search.

"We knew when we started the process of looking for a new manager that the deadline on our accounts was imminent, but our process continues," he said.

"Everyone knows that there are key off-the-field matters here at Coventry City, but we have been working as hard as we possibly can behind the scenes to mitigate the effect they can have on the pitch."

They are also still to resolve their year-long rent row with Ricoh Arena owners ACL.

The important thing is that, whoever is manager of the club between now and the end of the season, they have the best possible squad available to make it a successful one

But, on the field, Coventry, now ninth in League One, still remain in play-off contention, seven points adrift of sixth place.

It is now almost three weeks since Mark Robins departed for Huddersfield.

Since then, Coventry have won three times on the road under caretaker boss Lee Carsley, but lost twice at home.

However, former Sky Blues midfielder Carsley is not believed to have applied for the job.

"We have kept all of the shortlisted candidates informed," added Waggott. "And we have kept Lee Carsley fully briefed too because that is the right and proper thing to do.

"The important thing is that, whoever is manager of the club between now and the end of the season, they have the best possible squad available to make it a successful one."

Black, 49, who still lives in nearby Leamington, has not had a club since leaving his post as Blackburn Rovers assistant manager following the sacking of Henning Berg in January.

Three-times capped former England centre-half Curle, 49, has been seen at several recent Sky Blues games after being sacked by Notts County on 3 February.

And former Scotland striker Dickov, 40, sacked by Oldham Athletic a day later, is reported to have been present at Coventry's 2-1 home defeat by Swindon Town on Saturday.