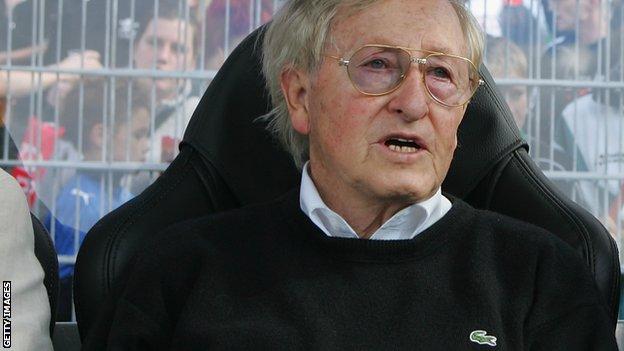 Rudi Gutendorf has witnessed bribery, betrayal by his own players and the horrors of genocide during his coaching career, so it may surprise some that he still wants to add to his colourful CV.

Instead of enjoying the fruits of retirement after an incredible managerial career, which has seen him coach 18 national teams and six different clubs in the German top flight, the 86-year-old is desperate for another job.

And whatever Gutendorf lacks in youth - he led Duisburg to runners-up spot in the inaugural Bundesliga season in 1963-64 - he more than makes up for in experience.

While Gutendorf accepts the possibility of being offered a role at home are slim, he has an unparalleled knowledge from coaching in every corner of the globe having been something of a footballing missionary - when he was funded by the German government and football association to take his expertise to the developing world.

And it's not just his experiences on the football field which mark out Gutendorf, but also the many challenges he has faced off the field - including when he was sent to Rwanda at the end of the 1990s.

The country was still recovering from a brutal civil war in which the government-led Hutu tribe carried out a fierce genocide against the Tutsis, killing up to a million people.

"The German government told me, 'Rudi, we don't care if you win 1-0, 2-0, the most important thing is the social aspect; that you try to get together the two tribes'," Gutendorf told the BBC's World Football programme.

"Such hate, you cannot believe. I was able to unite these two tribes to play football, and good football.

"After every training in the evening, we made a camp fire. We were sitting around and I made half Hutu, half Tutsi.

"I explained that revenge leads to nothing and to forgive each other. It was not easy because they saw how they killed each other.

"I said it makes no sense, you're now a footballer. I came here so we can work together, and that made a big impression."

A 2-2 World Cup qualifying draw in Kigali against an up and coming Ivory Coast team was the high point.

"The public in the stadium, they were still here are the Tutsis and there are the Hutus," said Gutendorf. "But when we played good football they forgot it and they hugged each other and they felt like a united nation. I'm very proud about that."

Earlier in his career, while coach of Chile, Gutendorf had installed a wall with holes in at the national stadium in Santiago, through which his players had to kick the ball from distance.

Such hate, you cannot believe. I was able to unite these two tribes to play football

But he had to leave in a hurry because of his association with the deposed socialist president, Salvatore Allende, after Augusto Pinochet's junta took over - meaning he was not able to lead Chile in the 1974 World Cup in his native West Germany.

Infamously, Pinochet decided to use Gutendorf's practice wall as the place against which hundreds of dissidents were shot.

While in Nepal, Gutendorf found himself on both sides of the bribery line. He turned down $500,000 from an oil-rich sheikh to lose 8-0 in the Asian Games.

But after a monsoon hit Nepal's match with India, with the score poised at 0-0 at half time, he bribed the referee with a bottle of whisky to play on.

He knew that Nepal had the right studs and India didn't. Nepal won 1-0.

Gutendorf says the two events in his life that have left him with "unhealed wounds" are his sacking as the Iran Olympic coach, just before they won the 1990 Asian Games, "because the religious leaders did not want an unbeliever on the bench" and his loss of the Hamburg dressing room after signing Kevin Keegan from Liverpool in 1977.

"Six weeks before I came to Hamburg, they won the European Cup Winners' Cup," he said.

"I wanted to make a very big team like Bayern Munich and with Keegan it was possible.

"I'm sure today, otherwise I would not say it, that the players made sabotage against me. The first game of the season we lost 5-2 and I saw that my players didn't like to win."

"My own players, they sacked me. That is the hardest thing that can happen to a coach," he added.

"I was so fed up. I went away as far as possible in the world. I became the national coach of Australia."

There, he again narrowly missed out on qualifying for the World Cup, something for which, Gutendorf says, his Australian wife still hasn't forgiven him.

That, as they say, is another story for another day but Gutendorf is keen to add one more chapter to a fascinating career.

"I am fit and healthy enough to take over a first division team as head coach," said Gutendorf. "But the club presidents here in Germany don't believe me.

"They say 86, that is too old. They are a little bit ashamed to give me a contract. It makes me sad but I can't change that."