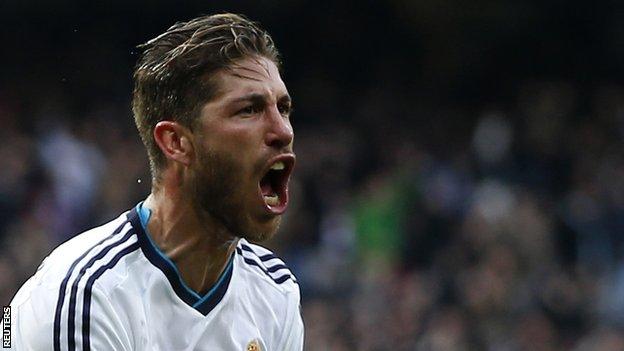 Real Madrid warmed up for Tuesday's trip to Manchester United with a 2-1 Clasico victory over Barcelona thanks to Sergio Ramos's late header.

The Catalans looked ragged as they stumbled to another defeat, and Victor Valdes saw red after the final whistle.

With an eye firmly fixed on his team's impending trip to Old Trafford, Real boss Jose Mourinho rested several of his key players including Ronaldo, Mesut Ozil and Xabi Alonso.

Nevertheless, the home team started brightly and took an early lead when youngster Alvaro Morata, replacing Ronaldo on the left wing, produced a defence-splitting cross to create a simple far-post tap-in for Benzema.

Barcelona were soon back on level terms as Messi received a pass from Dani Alves on the right of the penalty area, squirmed away from Sergio Ramos and drilled a firm low left-footed shot inside the near post.

The strike was his 18th in the Clasico and put him level with legendary countryman Alfredo di Stefano.

The visiting team controlled possession for the remainder of the first half and Messi had another opportunity when he latched onto David Villa's square ball but curled his shot too close to goalkeeper Diego Lopez.

At the other end, Madrid's only clear opportunity came when Modric's cross found Morata, who headed into the side-netting.

Sergio Ramos's late goal saw Barcelona fall to their first league defeat away to Real Madrid in four seasons, a spell that included three wins and one draw

Barca continued to dominate in the early stages of the second half, forcing Mourinho to introduce Ronaldo shortly before the hour mark.

That changed the game, with Real looking increasingly dangerous as Ronaldo forced a good save from Valdes with a thunderous free-kick, while Morata was brilliantly denied by the visiting keeper after being played through on goal by Pepe.

The winner arrived inside the final 10 minutes when Ramos rose at the near post to meet Modric's inswinging delivery and send an unstoppable header inside the far post.

While Ramos's goal meant little to their hopes of catching runaway leaders Barcelona, it moved them to within one point of city rivals Atletico Madrid ahead of their game at Malaga on Sunday.

The margin of victory could have been even greater as Ronaldo crashed another set piece against the upright with Valdes rooted to the spot, although Barca could have been awarded a penalty when Adriano was challenged by Ramos.

The final whistle was greeted by rapturous celebrations from the home fans, while the frustrations of the visiting team were evident in an ugly post-match confrontation that resulted in Valdes being sent off for clashing with referee Miguel Perez.