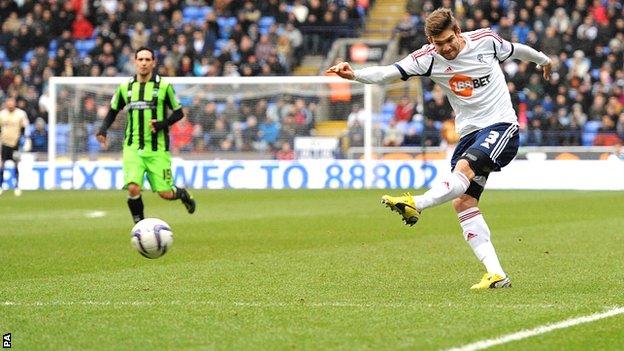 A superb first-half strike by Marcos Alonso was enough to give Bolton a fifth straight victory at the expense of fellow play-off chasers Brighton.

The Seagulls started well and a low effort from Andrew Crofts went behind via the base of Andy Lonergan's post.

Against the run of play, Alonso then struck a drive into the far corner.

Brighton pushed for an equaliser and David Lopez volleyed over the bar, but Ashley Barnes was sent off for dissent as Wanderers held on for the points.

The result sees Albion fall out of the Championship's top six, while Bolton have now gone eight matches without defeat.

Gus Poyet's side drop to seventh, one point behind a resurgent Nottingham Forest, with Bolton two points further back in eighth.

The visitors had arrived on a run of four wins from six unbeaten games and Barnes flashed an early header over the bar as they looked to consolidate their top-six credentials.

Wanderers midfielder Darren Pratley then brought down Vicente and from the resulting free-kick Lopez found Crofts unmarked and Bolton keeper Lonergan stretched to push his strike away from the top corner.

More slack marking from a Lopez set-piece allowed Leonardo Ulloa to head goalwards and it took Lonergan's boot and the woodwork to deny Crofts.

That miss proved costly when Alonso strode towards the left-hand corner of the area and brilliantly drilled his third goal of the season.

Brighton again displayed the greater industry early in the second half and Lopez sweetly caught a 20-yard volley that flew narrowly off target.

At the other end, Matthew Upson headed over from a corner and Vicente warmed Lonergan's palms from the edge of the box.

Ulloa should have done better from another dangerous Lopez delivery and substitute Andrea Orlandi cut in from the left to flash past the far post.

But Brighton's frantic late push proved fruitless and Barnes's red card only added to their troubles.

"That was our best game away from home in a while, absolutely no doubt. Control, passing the ball, more shorts. We really wanted to win the game. The only disappointing part is the result. The rest is very good.

"Sometimes when you are in control and have the chances you have to be careful. We lost a great chance of winning this game.

"You need to give credit to the opposition. Games like today I go home and think 'this is my team'."

Bolton manager Dougie Freedman: "I know it's an old cliche but I'm not interested in what's up or down.

"I said that a few weeks ago when a few people were questioning me about relegation - I thought they were crazy. I didn't think it was a question I should have had."