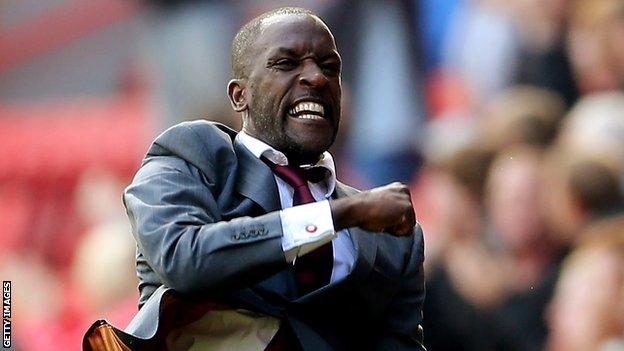 Charlton arrived at Huddersfield having won just one of their last eight games.

Harriott opened the scoring after just three minutes, firing beyond goalkeeper Alex Smithies from inside the area.

Huddersfield's best chances came through Theo Robinson and Adam Clayton, but the Addicks kept them at bay to seal victory.

The win moved Powell's side up to 12th in the Championship with 47 points, while Huddersfield are 18th, only five clear of the relegation zone.

Terriers boss Mark Robins decided to keep faith with the side that beat Middlesbrough 2-1 at the John Smith's Stadium in midweek but the optimism engendered by that victory was punctured within minutes.

Saturday's win was Charlton's first at Huddersfield since December 1999.

Huddersfield were struggling to forge chances, and their first effort of note did not arrive until the 15th minute when Oscar Gobern headed wide at the near post.

They went closer to equalising after 27 minutes when Robinson's powerful header was pushed away by David Button, before Michael Morrison cleared Charlton's lines with Lee Novak lurking.

After the break, it was Charlton who had the better chances, Danny Haynes forcing a smart save from Smithies while Johnnie Jackson's free-kick was cleared off the line by defender Peter Clarke.

Huddersfield could still have snatched a point in stoppage time when Clayton's 30-yard drive was heading for the corner, but Button did well to scramble the ball away.

Huddersfield manager Mark Robins said: "We were brilliant on Tuesday [against Middlesbrough] but today we have been undone by a set-play.

"It feels like a step forward then two back but we have to take these on the chin I am afraid.

"We've not had enough quality. We have had plenty of ball in their box and although the way we got it there wasn't ideal, needs must at times."

Charlton manager Chris Powell said: "It was hard-earned but I'm really pleased with the performance of the players.

"We had the perfect start. We countered well, we knew we would have to be on our mettle in the second half and we knew the pressure would come.

"Every player played their part but the centre-backs and the goalkeeper, they showed a real desire to keep the ball out of the net."