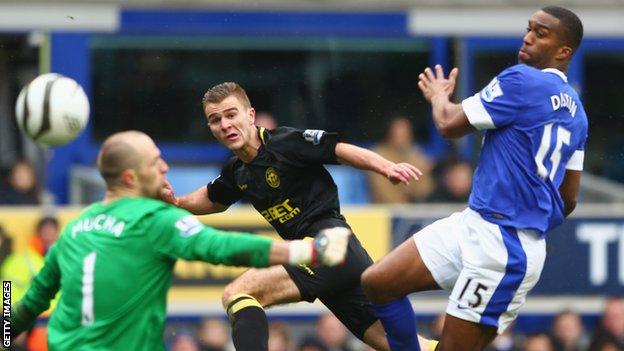 Wigan produced a superb performance to reach the FA Cup semi-final for the first time and leave Everton and manager David Moyes shell-shocked at Goodison Park.

Everton had been pre-match favourites to reach the last four for the second successive season - but Wigan will go to Wembley after a devastating burst of three goals in less than four first-half minutes.

Moyes and his players were left to face the fury of fans at a rapidly deserting Goodison Park and the grim reality that the Scot will mark the 11th anniversary of his appointment as Everton manager still without a trophy to his name.

Everton would have thought a relatively kind draw offered a reasonable hope of a return to Wembley but Wigan, composed throughout, were outstanding and no-one could begrudge them such an emphatic victory.

Moyes, still to commit his long-term future to Everton, has said he will make a decision at the end of this season and it remains to be seen whether a defeat of such disappointment and significance - and as the result of such an abject, uninspired performance - has a decisive impact on his next move.

For Wigan, this was a performance that offered sweet relief from their annual struggle against relegation from the Premier League and was of such high quality that it can only give them confidence for the crucial next few weeks.

Everton were without first-choice keeper Tim Howard, out with a back injury, but replacement Jan Mucha could hardly be blamed for a first 45 minutes that was nothing short of a fiasco for Moyes and his players.

Wigan, beaten with such ease by Liverpool at home last week, were a team transformed and Shaun Maloney could have put them ahead early on as his angled shot from 20 yards beat Mucha but bounced to safety off the inside of the post.

It was only a temporary reprieve as Wigan took the tie away from Everton with a stunning burst of three goals in a remarkable three minutes and 23 seconds just after the half-hour.

Everton were also without injured England defender Phil Jagielka but his absence cannot be offered as an excuse for the ease with which Wigan swept them aside.

Mucha saved well from James McCarthy but from the resulting corner Figueroa made the most of poor Everton marking to rise at the far post and head home.

It was no more than Wigan's enterprise merited and they swiftly doubled their advantage as Phil Neville's poor pass sent McManaman clear. He waited for Mucha to commit himself before sweeping in a composed finish.

And Goodison Park was left shell-shocked as Arouna Kone set up Gomez for another precise finish past the helpless Mucha from 18 yards. Jeers rang out around an angry stadium as the Wigan supporters - who had not even claimed their full ticket allocation - celebrated with a mixture of elation and disbelief.

Everton's plight, if it was possible, almost worsened as half-time approached with Mucha showing agility to turn Maloney's floated free-kick over the bar.

It was a desperate time for Everton and Moyes, the manager's response being to replace captain Neville with striker Victor Anichebe for the start of the second half.

Everton, as was to be expected, showed a little more vigour at the start of the second half but it was a reflection on the normally influential Fellaini's lamentable performance that he was replaced by Darron Gibson with 23 minutes remaining. Nothing, however, was going to turn the tide of this game as Wigan closed out a landmark victory.

Wigan manager Roberto Martinez: "I thought the performance was outstanding from the keeper all the way through, to come to Goodison Park. To be able to score three goals and keep a clean sheet speaks volumes.

"I think we deserve a little bit of credit. We stopped them from being dangerous. We knew when to keep the ball, when to go forward, and we looked a real threat every time we got into the final third."