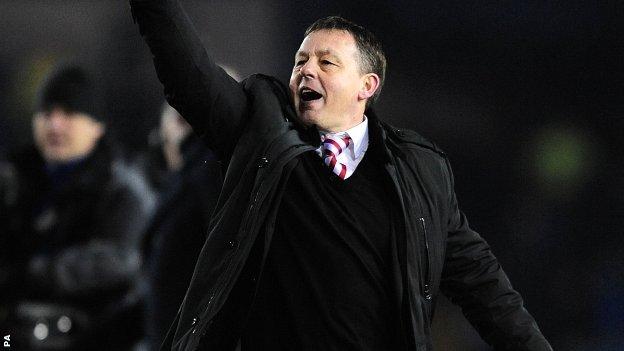 Henri Lansbury scored from 20 yards to put Forest ahead at the break.

Matt Doherty's header brought Wolves level but Lansbury curled Forest back in front and Lewis McGugan scored from the edge of the box.

The result leaves Wolves, who had Stephen Ward sent off late on, out of the relegation zone on goal difference.

Bristol City's victory over Middlesbrough brought the Robins, who are in 22nd, level with 21st-place Wolves on 39 points and the Black Country club are just one point ahead bottom-of-the-table Barnsley, who have two games in hand.

The current plights of Davies and Wolves manager Dean Saunders could not be more contrasting, with Saunders enjoying just one victory since taking over in January,

His side could have gone behind before Lansbury, who was teed up by former Wolves midfielder Adlene Guedioura, got the first of his two goals, arrowing a right-foot shot into the bottom left-hand corner from 20 yards.

Just after the half-hour mark Wolves came close to equalising but Bakary Sako's free-kick hit the crossbar and Bjorn Sigurdarson missed the follow-up.

The visitors were rewarded for a decent spell when Sako's cross was headed in by Doherty, but 90 seconds later Lansburys's curled shot restored Forest's lead.

McGugan went close with a free-kick midway through the second half before last-man Ward was dismissed for body checking Greg Halford.

Forest striker McGugan then compounded the misery by scoring after a quick counter-attack, finding the net via the crossbar.

Nottingham Forest manager Billy Davies: "We can take a lot of confidence from getting into the top six, but I spelt out a message to the players afterwards.

"It is that you can fall out of the top six as quickly as you got into it, so I am stressing the need to focus on every one of our remaining nine games as they come along.

"The effort and spirit the players have shown has been superb and they picked up another three great points today."

Wolves manager Dean Saunders: "I am not going to get down in the dumps because there was a lot of good things about our performance and it is a fact that we got Forest at a very bad time. They have a lot of players who are high on confidence.

"The difference was really that they took their chances and we didn't, because other than the goals Forest didn't have that many opportunities.

"We've got to put the game behind us quickly because we have a massive game coming up against Bristol City next week."