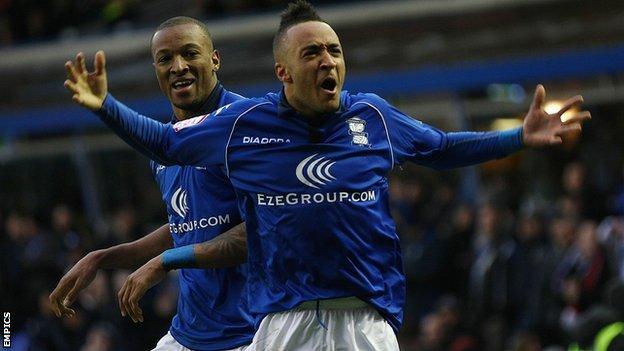 Birmingham moved seven points from the relegation zone as they came from a goal down to beat Derby.

The home side fell behind after Craig Forsyth headed a ball across the box and Ben Davies scored from close range.

A Callum Reilly shot for the Blues struck the woodwork before Wes Thomas equalised when he turned and fired in.

Nathan Redmond powered in a 25-yard strike to put the home side in front and Thomas scored from 12 yards to ease Birmingham's relegation concerns.

The victory lifted Birmingham to 14th, which is their highest position since late September.

Derby have failed to win in eight games and are six points from the relegation zone.

The struggles of both teams resulted in a scrappy first half, with the highlight being Davies's goal for the visitors.

Birmingham manager Lee Clark: "[Nathan] Redmond has waited a long time for that first goal of the season and it was a fantastic strike.

"I have said all along that I have faith in [Wes] Thomas. There is a lot of pressure on him and he showed me against Derby the form he displayed at Bournemouth, Blackpool and Portsmouth.

"The result was that we played with a lot of more power, pace and energy and we did to Derby in the second half what they did to us to us in the first half."

Derby boss Nigel Clough: "We should have scored more than one goal in the first half particularly when a team is struggling at home.

"More experienced players would have gone on and killed off the game.

"On 45 points there is certainly a lot more work to be done as we have been looking over our shoulders for some while. We have not been looking up too often either."