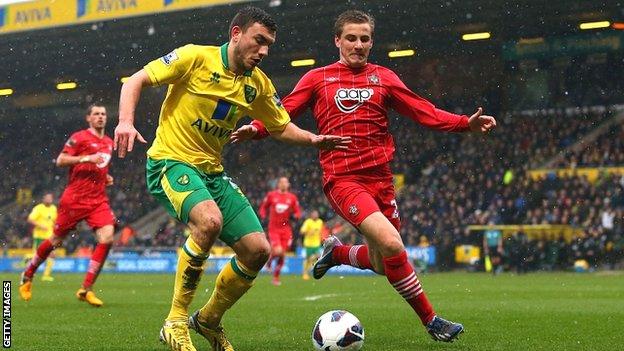 With the match heading for a low-key draw, referee Mark Clattenburg awarded the hosts a spot-kick when Luke Shaw tripped Holt as he ran out of the box.

Southampton were furious but Boruc dived to his right to save the penalty.

The visitors had earlier created the better chances, with Adam Lallana, Gaston Ramirez, Rickie Lambert and Jay Rodriguez all failing to capitalise.

A point was the least they deserved for their endeavours, but it was almost taken away from them when Clattenburg pointed to the sport.

Javier Garrido's long ball forward bounced through to the right and, as Holt and Shaw ran to retrieve it, they collided and a penalty was given.

Clattenburg ignored Southampton's protests, consulted with his assistant and maintained his stance - only for Boruc to provide a final twist.

It was a dramatic end to an otherwise unspectacular encounter, not too dissimilar to their in November.

"It was almost the last kick of game. Mauricio Pochettino's team were one kick away from losing the match, but ultimately it didn't matter because the goalkeeper made the save. It looked a very harsh penalty, it was a very big call for Mark Clattenburg and Southampton so nearly ended up empty handed. As it is, Grant Holt couldn't take the opportunity and Southampton go home with a point."

As recently as three seasons ago this match was a League One fixture, and in the opening stages the quality of football on display was certainly some way off top-flight standard.

The players were not helped by cold, wet and occasionally snowy conditions at a subdued Carrow Road, but perhaps a lack of confidence from recent results was the more significant factor.

While Norwich could lay claim to only one victory from their previous 11 Premier League games, Southampton had managed just one in six since Mauricio Pochettino succeeded Nigel Adkins as manager.

But as the half progressed space began to emerge and the visitors utilised their extra man in midfield to probe for an opener.

Chris Hughton's decision to hand striker Kei Kamara his first Norwich start alongside Holt in a 4-4-2 formation enabled Southampton, who opted for a 4-5-1 structure, to create a string of chances.

Goals and wins in short supply

Inspired by the attack-minded triumvirate of Lallana, Ramirez and Lambert, Saints twice threatened to break the deadlock before Lallana's drive was tipped over by Mark Bunn.

Bunn made an even better save to keep out a Ramirez chip after he was put through by Lambert - and it was that let-off which finally appeared to spur Norwich into life.

Robert Snodgrass tested Boruc with a swerving free-kick before a sliding Holt failed to connect with a low Snodgrass cross, although it seemed he was being pulled back by Shaw.

Michael Turner headed narrowly wide as Norwich reached half-time on top, which with Southampton still looking to attack at every opportunity made for a potentially exciting second period.

And so it proved as Lallana shot over following Javier Garrido's poor clearance and Maya Yoshida slid in brilliantly to intercept a Snodgrass cross with Holt waiting to pounce.

Rodriguez was denied by Bunn and Lambert wasted the follow-up, while Yoshida again arrived with impeccable timing as Snodgrass latched on to Wes Hoolahan's pass and rounded Boruc.

Then came Clattenburg's contentious call, but Boruc had the final word.

"The lad pulled off a very good save. That was out first penalty this season. It would have been nice.

"Grant has done well and got ball side of the defender. There's certainly contact there - whether there's enough for a penalty… If anything, we had an even better shout in the first half towards the end.

"In some ways it balances out. It hasn't done for us this season - that was our first penalty - but today it has. Over 90 minutes I thought we had the better chances. Robert Snodgrass had the best chance of the game.

"It was a typical game at this stage of the season - both teams fighting very hard. We've got a couple of tough away games now and we'll try to get something from them."

"From seeing it on the pitch I thought it wasn't a penalty. The ball was heading out towards the corner. Luke Shaw was running after ball and his rival clatters into him. Upon seeing the review on TV it's super clear to me it's not a penalty at all.

"Artur was phenomenal in saving that penalty. There's an old saying in foot - if you can't win, you shouldn't lose and that's what happened today. We didn't deserve to lose.

"What is clear for me over 90 minutes is that we deserved to win, but looking at the goal at the end at least we saved a point."