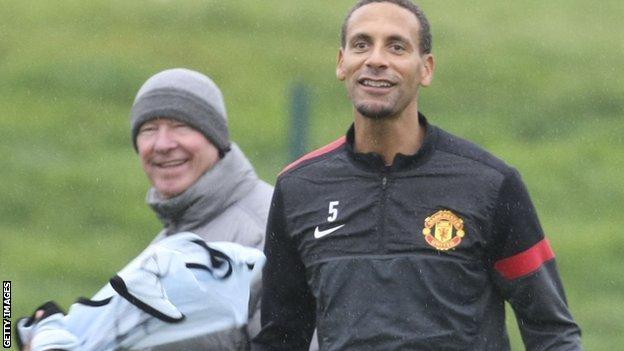 The 34-year-old joined United for a then-British record £30m from Leeds in 2002 but his current deal expires at the end of this season.

However, when asked if Ferdinand would be signing a new contract, Ferguson said: "That is a strong possibility."

And Ferguson is keen to keep another of his more experienced players, who has been rumoured to be joining teams in the United States and China.

"I think he has had a great season," said the Scot.

"He has managed himself the right way and we have contributed to that in the preparation we give him.

"But in terms of key matches he has been absolutely brilliant.

Ferdinand, who has won 81 England caps, is managing a long-standing back complaint and has not been picked for the national team since June 2011.

However, he has remained an integral part of the Manchester United side, playing 24 times this season and helping his club to a 12-point lead at the top of the Premier League and into the last 16 of the Champions League.

During his time at Old Trafford, Ferdinand has made 420 appearances in all competitions and won the Premier League five times, the Champions League once, the Club World Cup once and the League Cup on three occasions.