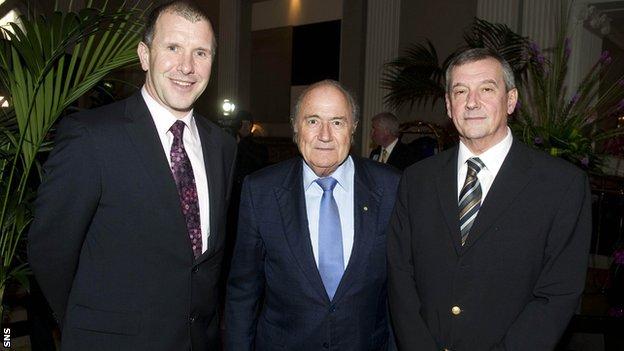 Scottish Football Association chief executive Stewart Regan has urged a line to be drawn under "what's gone on in the last 12 months".

"There's been an awful lot of animosity and ill-will expressed," said Regan.

"When you look at the bones that are being picked over, it's not particularly helpful."

And he added: "If we were as good at promoting and growing the game on the field as we are at picking over the bones and the negative issues and the animosity and the conspiracy theories, we would be really world class.

"The whole focus for Scottish football over the last 12 months has been about doing what's right for the good of the game. It's not about trying to find scapegoats to take responsibility for what's happened in the last 12 months.

"It's crucial with league reconstruction being such an important issue for the game that we now draw a line under what's happened and seek to work together collaboratively to try and build a stronger game and a stronger proposition for fans to watch."

In the wake of the decision to fine Rangers' former owners £250,000, current club chief executive Charles Green repeated his claim that "people within the SPL wanted me, at first, to surrender titles as part of a deal to enable Rangers to play again as a member of the SFA".

Green's consortium bought the Ibrox club's assets after liquidation could not be averted and Rangers began this season in Division Three.

Rangers' use of employee benefits trusts during a 11-year period which the club won five SPL titles was the subject of the commission's investigation, and also a long-running tax tribunal.

"When the consortium approached the Scottish FA and were interested in buying Rangers Football Club, they asked through the leader of that consortium, Imran Ahmed, to outline what was the worst possible punishments that could happen to the club if they were found guilty of a different crimes to football, for want of a better expression," explained Regan, who has been meeting with Fifa president Sepp Blatter this weekend.

"The reason they wanted that information was because they had investors, who were looking to put money in the club. Those investors wanted to know exactly what the implications were of investing in the Rangers Football Club.

"So, at the outset of the discussions, what came onto the table was literally every possible sanction and every possible issue that could be raised, whether that was bringing the game into disrepute that had gone on or the 'unknowns' as we call them that were still being discussed at the time.

"So, there had to be certain assumptions made and, at the request of the club, everything that could possibly be levied on the club was put on the table.

"Over the course of a number of drafts of the agreement, various parts of that were then negotiated out and that was part of an ongoing process involving the [Scottish] Football League, the Premier League in Scotland, the Scottish FA and both oldco and newco as far as the Rangers Football Club are concerned."

On the commission verdict itself, Regan said: "The report is subject to appeal from both sides and, as the appellate body, it's not really up to the Scottish FA to be passing any comment on the sanction at this stage."

Meanwhile, Green has described Celtic's response to the commission decision as "'ill-timed and inappropriate''.

Celtic said in a statement they were "surprised by the parallel conclusion that no competitive advantage was gained from these arrangements".